I just got the Pathfinder RPG Core Rulebook, and the Rise of the Runelords Anniversary Edition adventure path.

The Core Rulebook is a whopping 570 pages of roleplaying goodness. It has the gorgeous Wayne Reynolds art for the character classes (he did quite a lot of Magic cards, too) and has all the rules and background for the Pathfinder version of D&D 3.5. 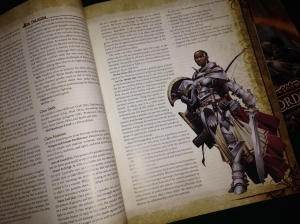 The Paladin Class, with the illustration of Seelah.

I plan to read up on the classes to get a better idea of where the flavour of the characters in the card game comes from. I can also get a feel for the various spells, items and weapons in the card game and how they relate to the original rpg versions.

I also got the new collected hardback edition of the original Rise of the Runelords campaign, since the adventures in the PACG follow this same story. I just need to be good and not read too far into the campaign before I get to play the card game expansions. I don’t want to spoil the surprise. 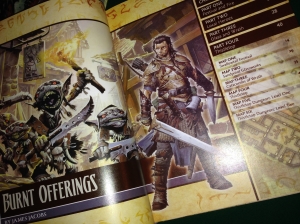 The Burnt Offerings Adventure. You can see the chapters  on the right which align to the card game scenarios.

I have dipped into the first chapter, which is the Burnt Offerings adventure leading up to the defeat of Nualia at Thistletop. It is pretty cool to read the background on the town of Sandpoint and the non-player characters and villains.

Next up, I need to get the Bestiary (i.e. Monster Manual), so I can read up on all the monsters in the card game.

By then, I’ll have everything I would need to actually run a Pathfinder game, although I am never going to do that. I just love reading rulebooks, and well-written published adventures.