I resumed my original PACG party’s adventures and took them through the final two scenarios in the Burnt Offerings adventure.

The party is Valeros the Fighter, Seoni the Sorceress, Kyra the Cleric, and Merisiel the Rogue.

They were making their way down into the catacombs below the mountain in the final scenario, Thistletop Delve, and had cleared out five locations before finding Nualia the evil priestess in her Throne Room as the last card of the last location.

Valeros, Seoni and Kyra were gathered in the Throne Room to join in the attack. Merisiel was clearing out the Goblin Fortress.

There were still a few turns to go, but Nualia’s force blasts during two unsuccessful attacks had left Valeros, Seoni and Kyra with no cards. 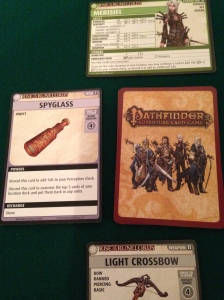 Merisiel only has a crossbow after Nualia’s force attack

With no spells or equipment, Seoni could not face Nualia and hid during her turn and reset her hand. Kyra did the same.

Then came the final turn of the game. Merisiel moved from the Fortress to the Throne Room to join the others. She encountered Nualia. Nualia’s force blast wiped out Valeros’ hand, hurt Seoni and Kyra and left Merisiel with only her crossbow.

Nualia’s first check is 12, plus 2 for each blessing played. Merisiel attacked with her crossbow and a blessing from Kyra. She rolled 17. Success!

Nualia’s  second check is 14, again plus 2 for each blessing played in the check. Seoni attacked with her Frost Ray, and two blessings.

She rolled 23, defeating Nualia and winning the game on the last turn!

Incidentally, Seoni had two cards in her hand and only two left in her deck. If her turn had come round again, she would have died when it came time to reset her hand at the end of the turn.

In this case it was Merisiel’s turn and the last turn of the game. If Seoni had failed, only Merisiel would have reset her hand at the end of the turn and then the game would have ended. Seoni would never have had another turn and so was not at risk of dying.