We played our first game  of Android: Netrunner. I was the corp Jinteki and Gab was the runner Kate McCaffrey. Gab won.

I did my usual trick of forgetting rules until half-way through the game. For example, Gab was only mildly disconcerted to suddenly discover she could only have five cards in her hand.

We found the game got a bit slow a couple of times. The first was when I ran out of agendas to play, and the second was when Gab was waiting to get an icebreaker that could break my sentries.

She tried running against HQ and R&D a few times but only accessed stuff she couldn’t trash, which was not amazing fun. 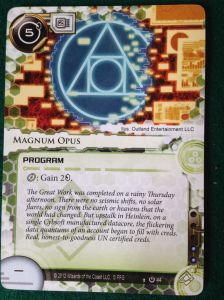 We were both OK for credits. She installed a Magnum Opus on the first turn to get a lot of money and then later trashed it to make room for icebreakers and switched to Armitage Codebusting (I love all the references in this game).

I found that the corp player needs to plan ahead a lot. You first need to build up a supply of credits, and then install some ICE in a remote server, and then install an agenda or asset and possibly advance it one or two tokens in one turn. This hopefully gives the runner only one turn before you can score it.

The credits are needed to rez the ICE in the event the runner does run against the server. ICE can be very expensive.

All this can take three or four turns to put together. Meanwhile, you can have an agenda sat in your HQ (hand) vulnerable to a run.

Also, there is a momentum that the runner builds up. After a certain point they have their suite of icebreakers installed and so long as they have the funds they can run against any of your servers. 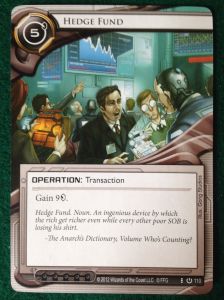 One of the typically dodgy ways that a corp can get credits.

The corp player needs to have a wide variety of ICE types to make this as hard as possible. Cards which trash programs (i.e. icebreakers) can help, and trashing resources can hurt the runner’s finances which will slow down the frequency of their runs.

I think the best plan for the corp is to move as fast as possible to score agendas before the runner can get their icebreakers and/or finances ready. Taking time to build up loads of ICE and protect all your servers is not the way to go.

Gab didn’t realise this was a collectible card game where you can build your deck like in Magic The Gathering. She is not sure about this, as she won’t really have the time to mess with deck-building and is worried she will lose some of the fun of the game.

I think we will be fine. There are twelve different two-player combinations in the base set which is plenty to be going on with. We will probably need to play each deck a few times to get used to the cards and how the strategies work, too.