We played our first game of Eldritch Horror as a six-player session. We chose the Great Old One Azathoth for a simple introduction.

The investigators were Josephine Fine the psychic, Lily Chen the martial artist, Mark Harrigan the soldier, Trish Scarborough the spy, Diana Stanley the ex-cultist, and Lola Hayes the actress.

Our foldout table in the office wasn’t big enough for six investigators and all the tokens, we had to use the desks as well.

We liked Josephine’s clue trading ability along with Trish getting new clues, but this wasn’t too powerful because one of the mysteries we had to solve could only use clues gained from research encounters and so we couldn’t just blitz it.

I kept getting confused with the two phases of the turn, ie actions and then encounters. I am too used to games where each character takes their entire turn before the next can act. Also, with six players and lots of questions about rules, it could take so long to take a turn that I would forgot what phase we were in. 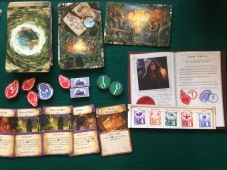 Diana Stanley and her spells

However the action phase could go fast, especially once we got the hang of patterns of actions we could take. A standard move was ‘buy a ticket, move two spaces’, which took seconds. We didn’t even bother taking the ticket token from the pile.

The encounters are much more streamlined with the simpler test mechanic. Most require only one success, so there is only one number to consider which is your skill and this is the number of dice to roll.

Game in progress. Lily died while killing a Cthonian.

We weren’t sure how the expeditions worked, or what the point of them was. To find out we sent Lily Chen on an expedition to the Heart of Africa. It turns out these are where you get the powerful artifacts. There is one active expedition and as each is encountered the next one is somewhere else in the world.

We missed some rules until part-way into the game:

A lot of the game seemed opaque at the start because, like many modern games, a lot of the rules are on the cards. As an example, we couldn’t figure out how the blessings or madnesses worked (ie when did we roll to flip the card?) until we drew a Mythos card with a reckoning icon and then it became clear. The expeditions were another example.

Azathoth and his mysteries

Everyone liked the game, though. We had a couple of non-boardgamers who got the hang of the rules easily enough, even if we all struggled at the start with finding general strategies to beat the mysteries.

With six investigators we always seemed to have plenty of people to get things done quickly. I think with only two or three it would be a harder game since you will be drawing Mythos cards more frequently. I will have to play again to find out.