The explorers from Miskatonic University are racing to Antarctica to stop the cult sorcerers from summoning Yog-Sothoth.

I played a few games of my new MU deck against the Yog deck. It was a bit swingy. The MU deck needed to win quickly, while the Yog deck was better in the longer games once it had a bunch of Yithians and a Lost Oracle or two in the discard pile.

A Lost Oracle could just keep removing success tokens from the MU side.

Also, the Yog deck has some very good removal in the form of Frozen Time (which hits Ultima Thule real bad since MU can’t play another because it is unique), and Rite of the Silver Gate, which zaps up to three cards. 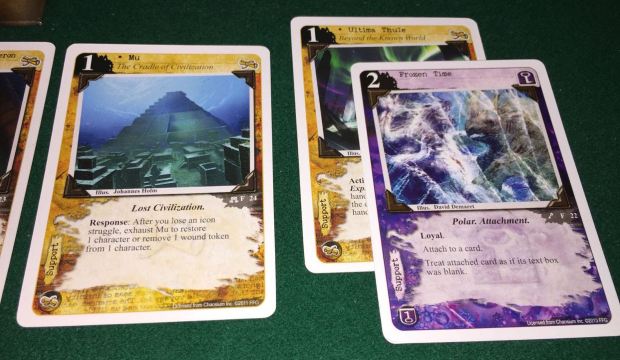 Frozen Time freezes the ancient polar civilisation of Ultima Thule and thus scuppers one of the MU explorer deck’s key bounce tricks. You can’t play another Ultima Thule because it is unique and you are not allowed to have two.

Frozen Time only blanks a card’s text box, so it isn’t so great against characters since they still get to use their icons and skill, but it totally flattens a support card.

The explorer deck, like most MU decks, is more of a rush deck. The idea is to win stories quickly with extra investigation struggles. What the explorer deck does have to help it survive in a longer game is powerful card draw, so it doesn’t run out of steam.

It can keep pulling more and more explorers out of thin air, all of whom boost each other, and there are secondary characters who can help play them cheaply so it doesn’t need much in the way of resources.

It also has some neat tricks. In one game, the MU player won with a surprise Expert Testimony which suddenly committed Whitton Green to a story after the Yog player had decided how to defend. 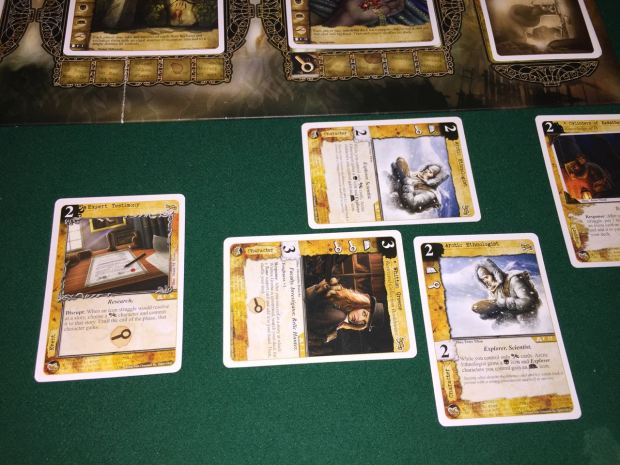 The end of one game. Whitton Greene was tricked onto the story by the Expert Testimony, winning four success tokens.

The Yog player had 4 tokens on the story and would win next turn. The MU player had only 1 token.

Normally, the MU player could only hope to win 3 more tokens, which is not enough to win the story.

Expert Testimony can commit a character to a story in the middle of resolving a story, which is not normally possible, and it also adds an additional investigation struggle.

Whitton also provides her own own extra investigation struggle, which makes three investigation struggles, all of which the MU player wins. This puts three tokens on the story, and then succeeding at the story with a higher skill total adds the fourth for a total of five, winning the story and the game. And this didn’t even involve any explorers!

Even so, the MU deck can definitely be improved. Its main problem is a slight lack of synergy.

There are explorer cards, which all work together nicely, but there are also other types which do not get the benefits that explorers do. These do have some overlap with cards such as Overworked Graduate Student (which makes Students and Faculty members cheaper to play). For instance, Whitton Greene and the Alternative Historian are not explorers but are both Faculty, and the explorers Brette Wulffsen and Roald Ellsworth are Student and Faculty respectively.

There is scope for building some more synergy in that Cylinders of Kadatheron is a Tome, and so can be fetched by Whitton Greene, and which can itself then fetch Tomes and event cards (e.g. prophecies). So it might be a good idea to add in more Tomes. There is one other Tome in the set, Apocalyptic Visions, which fetches prophecies and can ready MU characters when you play one. I could consider adding some of these. 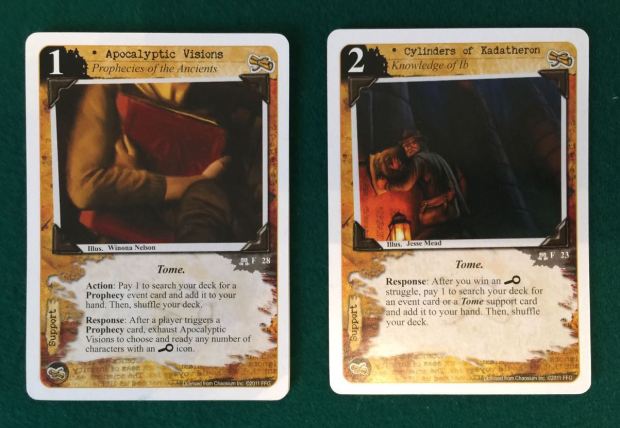 Apocalyptic visions is a Tome, so can be fetched by the Cylinders and by Whitton Greene. It also helps with prophecies, which is one of the deck’s strategies.

Another weakness of the deck is that there are a lot of characters costing 3 resources, which is quite expensive. It would be nice to have some cheaper replacements, but there aren’t any other explorers in the set and I don’t want to lose any if them. That leaves Whitton Greene as the remaining 3 cost character, but she is too good.

I guess I will have to rely on the Overworked Graduate Student to make these characters cheaper, and/or use Ultima Thule to bounce them into play.

Maybe I could swing more towards prophecies as there are a lot of prophecy-related cards in the set. I could add in Atlantis, which draws a card when you play a prophecy and can get them back from your discard. 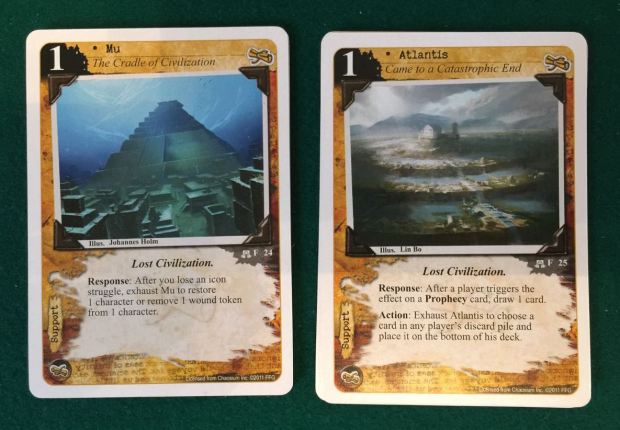 Mu doesn’t directly support any of the deck’s strategies, so I could replace it with Atlantis, which helps with prophecies.

I already have both MU prophecies in the deck and I want to keep the Expert Testimony. That leaves Daring Buju as a possible target for replacement.

Daring Buju is great for turning a terror struggle into another investigation struggle for free, for example, but it does require a spare character to be exhausted as part of the cost. I could replace it with Protecting the Anirniq, which bounces a replacement character into play during a story and then bounces it out again. I like the sound of this because it should work with the explorers while still allowing some story shenanigans. 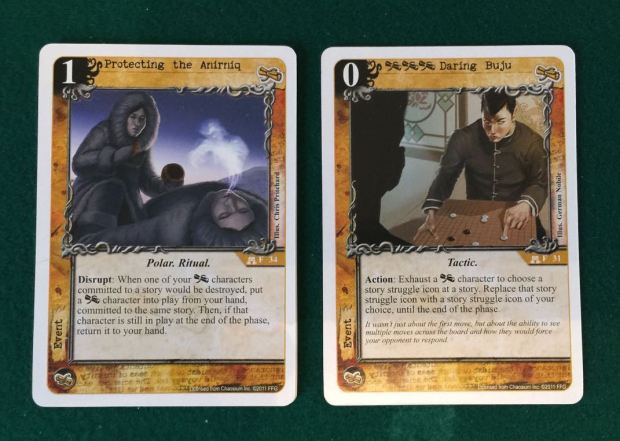 I am not sure about having to keep a character back in order to play Daring Buju as the deck tends to need all its characters at stories. Protecting the Anirniq needs me to keep a domain open, but I often find I have domains left open.

Supposing I replace Daring Buju with Protecting the Anirniq (I also like the polar theme for the explorers), then I have to decide what to replace Mu with.

There is only one slot left, so it is either Apocalyptic Visions or Atlantis. Atlantis would be super cool, but the Visions is also a Tome, so I will go with that.

Here is the new decklist: