I played another couple of games of Dark Gothic, the Spooky Hollow deck-building game.

This time I played with two random heroes and drew Charlotte Dubois the cutthroat smuggler, and Adrianna of Zartha the foreign traveler.

Charlotte’s main ability is that she draws seven cards each turn. This is a very powerful ability as you always want more points and so every card counts.

Adrianna has a neat ability in that she can convert up to two cards a turn into silver resources, which can be any colour. This is great early on, but less useful later when many of your cards are worth two or three points on their own. Also it only applies to fights.

The results were as follows:

Charlotte killed the first two villains, the Creeping Terror and the Banshee of Langmire, and Adrianna killed the third villain, the Vampire.

I kept forgetting Adrianna’s ability, which may have been why she scored so low.

Adrianna ended up with only 24 cards in her deck. This was by removing most of her starting cards using the Highwayman and Gibbering Evil. 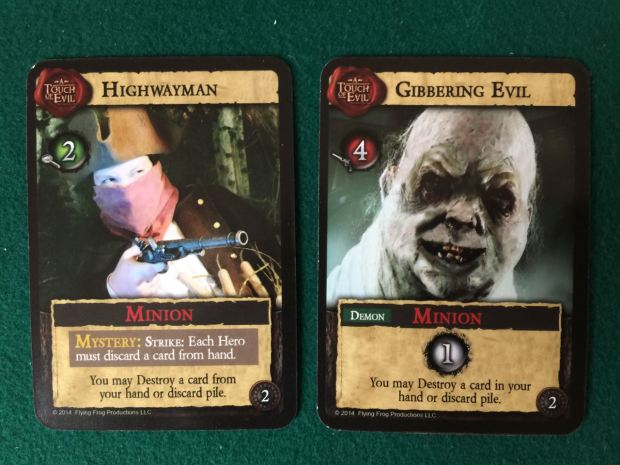 This meant that almost every hand had only good cards in it, but I should probably have got rid of the Highwayman after a while as he isn’t good for anything else. Of course, if I had remembered Adrianna’s ability he could have become a silver resource.

Charlotte won with a much larger final deck. She had no removal cards, and actually very few cards from the central row at all. She mostly ended up buying loads and loads of training cards. 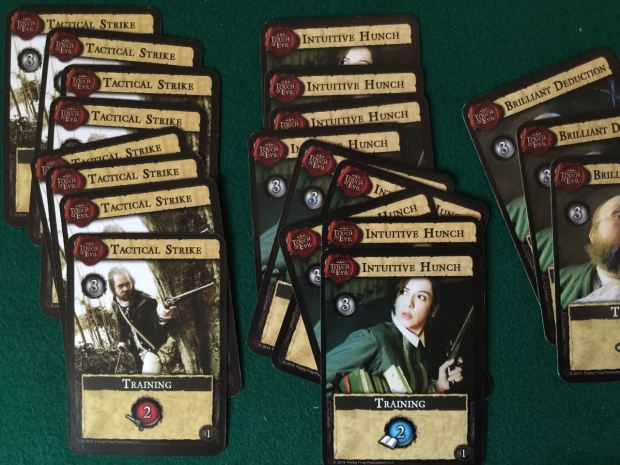 In the end she had 8 tactical strikes, 9 intuitive hunches and 3 brilliant deductions. It goes to show how solid these simple training cards are. They don’t do anything clever, just counting for two resources, but they all add up.

I do suspect this is mostly only true for Charlotte since she gets seven cards a turn. If you only have a hand of six cards you probably need more cards with special powers.

I then played a second game with two new random heroes, Katarina Clark the highway outlaw, and Brother Marcus the pious adventurer. 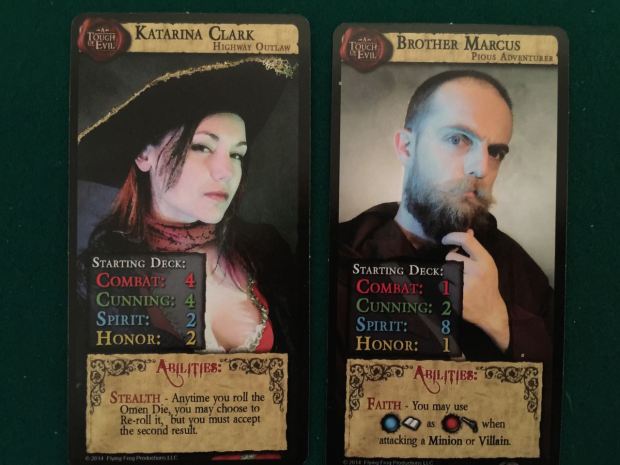 Katrina gets to re-roll the omen die, but in this game she never had to roll it at all so that wasn’t much use. She does start with two honour cards which are silver and also draw another card, so that is good.

Marcus has loads of spirit and not much else, but his ability lets him convert his spirit into combat when fighting. Unfortunately for him, the villains in this game mostly didn’t need combat and when they did (i.e. the horseman) they needed both combat and spirit. 😦

It was a quite quick game. Marcus killed the Bog Fiend and Katarina killed the Scarecrow and Horseman.

The final scores were Katarina 36 points and Marcus 23 points.

Katrina ended up with 26 cards and Marcus only 19. Most of their points came from the villains as they hardly had time to buy anything from the centre row, just a few training cards to bump up their weak colours.

I think this shows that there must be some good tactics to get a fast win. I don’t know what they are yet, though. 🙂