I liked the Dark Gothic game, so I thought I would try the Legendary Encounters: Alien game. This is another deck-building game and is a spin-off from the superhero-themed Legendary Marvel games. I’m not very keen on superhero games, but the Alien theme sounded good, especially as it is cooperative.

In this game you play the crew and are defending against advancing hordes of aliens while trying to complete the objectives of the films. There are four games in one, as there is a completely different set of crew, objectives, and aliens for each of the four Alien films. I’m not sure I would bother playing the third and fourth scenarios, though.

The box contains the usual hundreds of cards, plus a really cool playmat with an illustrated layout for all the various piles of cards used in the game.

A playmat is much better than a board because the cards don’t slide around on it.

To fulfil the objectives you have to reveal the appropriate cards from the Hive deck. This is the deck of mostly bad cards that you deal face down into the Complex spaces. 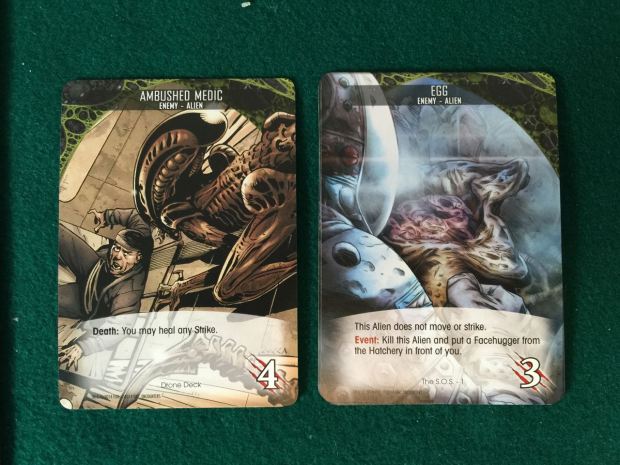 Examples of Hive cards. You need to spend 4 attack points to kill the alien, and 3 to kill the egg before it hatches.

Each turn these cards advance one space towards you and if they reach the Combat zone they turn face up and attack. You need to spend attack points to scan the spaces to turn them face-up an see what they are, and then spend more attack points to kill them if they are aliens. Early on, it is hard to get enough attack points to do this in one turn. 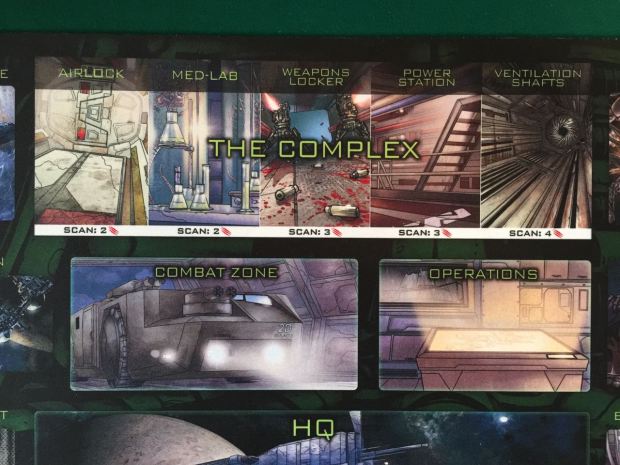 The Hive cards advance face-down along the five Complex spaces from right to left. If they pass the airlock they move to the combat zone and are turned face up. To stop them you have to scan them in the complex to turn them face-up and then deal with them there.

While this is going on you are going through your deck over and over again, buying better cards and adding them to your deck, like in any deck-building game. You really need to do this fast, as it isn’t long before the aliens marching through the complex get extremely tough.

These are the weak starting cards. The Grunt has 1 attack point for scanning and attacking, and the Specialist has 1 resource point for buying new cards.

The better cards are in sets for each of the four characters in the movie. In the Alien movie scenario you have cards for Ripley, Dallas, Parker and Lambert. These are all shuffled together into one ‘barracks’ deck and dealt into the HQ area for buying.

You need to plan carefully which cards to buy as they tend to work better alongside other cards with the matching class icons in their top left. If you don’t pay attention to this you will end up with a bunch of cards which can’t use their special effects.

Some of the better cards you can buy.

I played three games as two players. I won the first two and lost the third.

The Hive deck has some neat cards in it that really help reproduce key events from the film. The best are probably the Egg cards. When one of these is revealed, it sits in place and does not move or attack. You can kill it by spending your attack points. If you don’t kill it by the time an event card is revealed, then the egg hatches a face hugger and it clamps on to you.

You then have your turn and the next player’s turn to kill the facehugger or else it plants a chestburster in you, which goes into your deck. When you draw the chestburster, you die.

There are advanced rules where you then become an alien and attack the other players. It is already hard enough to win with one less player, but that might be fun.

In one of my games I left an egg alone too long. An event card turned up and the egg hatched a facehugger. Luckily I had enough attack to kill it straightaway.

There are other plot points from the movie triggered by the event and hazard cards. You can have a rough landing on the planet, or the self-destruct sequence can start and you have to try and stop it before it blows up in your face.

There is also a Jones the Cat character which is good if you can catch it, and an evil robot Ash who can only be killed with help from another player.

All this is only from the first film. I haven’t looked at the second scenario yet, but I expect it will play quite differently with all-new objectives, event and hazard effects.

I am hoping the generic name ‘encounters’ means they are planning to have expansions which add Predators. The company (Upper Deck) did buy licences for both Aliens and Predator so it seems likely.