One of the other games we bought on our recent trip was one of the Shadows of Brimstone set by Flying Frog.

Shadows of Brimstone is an old west horror board game, where you play cowboys battling against monsters from beyond.

It’s not technically a Cthulhu game, but it has that kind of flavour. The one we got was Swamps of Death. There is also City of the Ancients and they are compatible with each other which is cool. 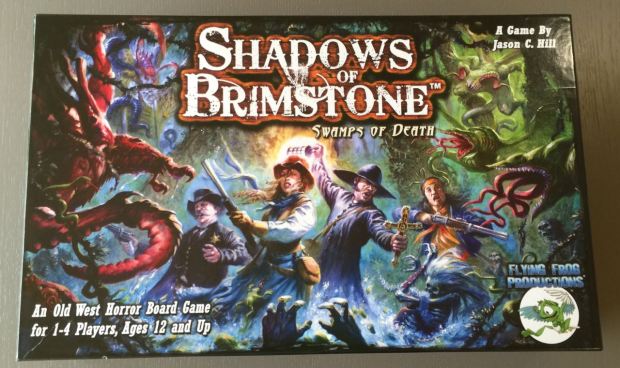 The Shadows of Brimstone games were financed by a Kickstarter campaign. This is very common for boardgames, but unusual for a game from an existing and successful company such as Flying Frog. This is the company that did A Touch of Evil (the Spooky Hollow game), and Last Night on Earth (the zombie game) amongst many others.

According to the blurb, the designers had developed a whole world for the game and wanted to launch it all at once rather than gradually. The kickstarter target was $30k and they reached over $1m.

I’m not surprised it was so successful as they have such a reputation for high quality games. If I’d known about the kickstarter, I would probably have backed it. I never back boardgame kick-starters because they usually fall foul of production problems through inexperience, but this was an already-successful games company who will have solved all of their production and logistics problems years ago and will be able to simply get on and put the thing together.

The box contents. There is a rulebook and an adventures book, along with charts, cards, dice, figures to put together, and the map pieces hidden under the plastic container.

The game is a cooperative exploration game (usually called a ‘dungeon-crawler’). You are a team of old west adventurers who explore a maze of swamps or mines, discovering monsters and treasure and portals to other worlds.

The board is made of interlocking shaped tiles which form the map and is revealed section by section as you explore.

The map tiles are all sorts of shapes that fit together like a jigsaw to make up the game board as you explore. Here are a few of the tiles waiting to be punched out. They are double-sided, with swamps on one side and deserted mines on the other. The glowing blue bits are portals to other worlds.

The characters are old west archetypes, such as the Lawman, Rancher, Indian Scout and Preacher. The miniatures need assembly and painting, but that should be fun. It looks like they will need some glue to put together, which I haven’t done in a long time. 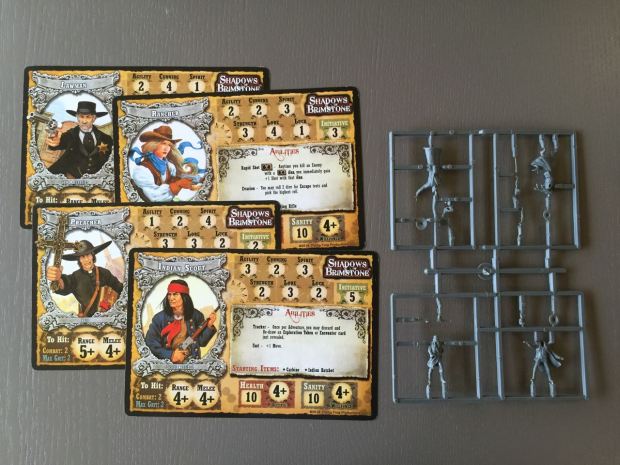 The characters and their miniatures. Some assembly required.

The monsters also come with miniatures. There are zombies, swamp-tentacles, bat-lizards, giant slasher beetle-things and a winged demon.  The winged demon, called The Harbinger, is huge. The hero figures only come up to its knees. 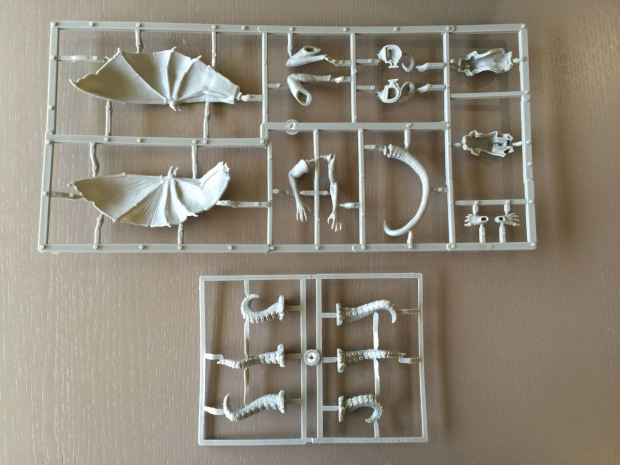 At the top is the gigantic Harbinger miniature. Below are some tentacles.

What Flying Frog have tried to do with this game is to create a bit of a role-playing game feel by encouraging you to personalise and customise your character. You level them up between adventures so they get new and interesting abilities and powers and can take on the scarier monsters in later adventures.

They can also visit the town and the various businesses there, such as the saloon and blacksmith, and there are tables to roll on for what happens. 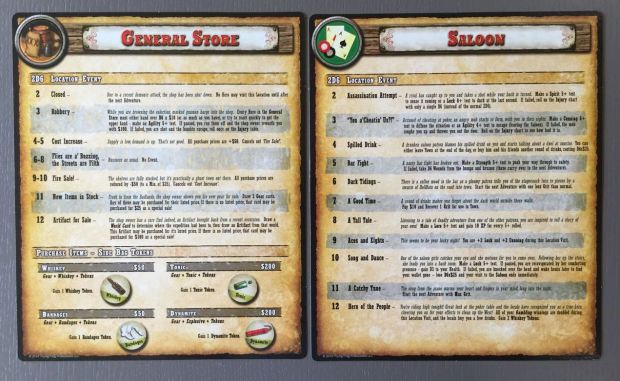 The other side of these charts contains price lists for equipment and services you can buy.

The whole thing has a certain level of humour which means it is not too po-faced and makes it all a little more accessible. It is also cooperative, which is pretty much the only kind of game we like to play.

I think the first step is to get all the pieces punched out and get the figures glued together. Then I can do a run through to get the hang of the rules. Then I can start doing the painting. Painting is my version of knitting.