Now I have a custom runner deck, I need a custom corp deck to play against.

Taking the Haas-Bioroid cards from the core set and from the Creation and Control deluxe expansion will give me a range of possibilities.

Haas seems to specialise in using its bioroid workforce to do all the work and hence gain extra clicks. These extra clicks in a turn will allow the corp to do what is known as ‘fast advance’, which is to play an agenda then advance and score it all in one turn.

Suppose you have an agenda which has an advance cost of 3, such as Accelerated Beta Program. On your turn you play the card Biotic Labor which gives you an extra click that turn for a total of 4 clicks (the corp only gets 3 clicks a turn usually).

Having 4 clicks allows you to install the agenda for 1 click and then spend 3 clicks to advance and score it, all in one turn. The runner never gets a chance to run and steal it!

There are lost of cards that support this strategy across all the different corps and expansions, but I will have a go at it using the cards I have in H-B.

So, to start with, I need to choose my agendas. These need to be cheap to advance.

The three-point agendas I have are Accelerated Beta Test, Gila Hands Arcology and Director Haas’ Pet Project. After that I have four-point agendas which aren’t quite so good for fast advancing, but I picked Efficiency Committee as it gives clicks (but not for advancing) and Private Security Force (to do damage as a secondary strategy).

Now I have my agendas, I need to pick some ICE to defend them.

ICE can be of three main types; code gates, barriers and sentries. I will need a variety of all three to keep the runner guessing. They will need a different breaker program to get past each type. A fourth type is traps, which can be awkward for the runner as they can’t be broken by the usual breakers and do something bad as well.

The guidelines according to the rulebook is to have 17-20 pieces of ICE in a deck, so that is roughly 6 of each, plus a couple of traps.

I will add in a variety of the ICE available to me from the H-B cards and the neutral cards. Some of these, particularly the large barriers, are expensive to rez, so I will add in some cards to allow me to put them into play more cheaply. One is Bioroid Efficiency Research, which rezzes an ICE for free, and others are Minelayer (which installs for free) and Howler (a trap which installs and rezzes for free).

For economy, I will use Hedge Fund (which is the corp’s version of Sure Gamble), PAD Campaign (a drip economy card, one credit per turn) and Adonis Campaign (which is sort of like Daily Casts). This isn’t a lot of economy cards, but I will be using my ICE rezzing cards to save money.

Lastly, I need to include Biotic Labor for the extra clicks in my fast advance strategy. 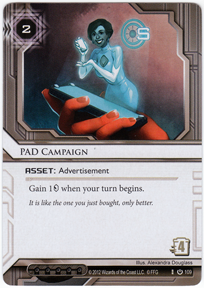 This is 45 cards. My overall strategy is to protect HQ and mainly R&D to defend against Shaper tactics, plus build a single remote server for hosting the four-point agendas that need two turns to score. I will put PAD Campaigns in unprotected remote servers, but probably put the Adonis’s in the protected remote server in between agendas. The Experiential Data is an upgrade that boosts the strength of that server’s ICE which can be a surprise and mess with the runner’s maths.

Now to pit these two new decks against each other. Kate vs Haas. Trickster vs Robots.

Two falls, two submissions or a knockout. Not really, it’s just first to seven as usual.