“Something is not right here”, says Valeros, looking around the marketplace. His hand moves to the hilt of his sword.

Merisiel taps his arm twice and vanishes into the crowd.

Turning, Valeros glances at the half-elven siblings. Lirianne and Seltyiel are a short distance away, heads together, whispering to each other. Valeros waves briefly to them. They nod, separate, and begin to survey the square.

The mood in the marketplace has subtlely changed. The volume of chatter is lower and the haggling merchants are less animated.

Valeros shifts his position to place his back to a wall.

Lirianne slowly pulls back the hammers of her flintlocks. There is a clear audible click.

For an moment, like a lull in a storm, a quiet falls over the square. Everyone seems to be holding their breath.

Merisiel appears at Valeros’s side. She is wiping a dagger on her thigh.

“There were five assassins,” she says. “The fifth got away.”

Valeros grimaces. “He will report back,” he says, “but to who?”

The hubbub in the market has returned to its normal level. There is no sign of any bodies.

“Four out of five?” she smiles, “You are slipping!”

Merisiel ignores her. “Our ship cannot leave port without a sealed pass,” she says, “The Sherriff is unlikely to provide us with one, so ours must be obtained through less-official channels.”

“Nefti Unwesha runs the local underground from her tavern, ‘The Mermaid’s Bucket’,” Merisiel replies, “She will surely have fake passes. We simply must persuade her to give us one of them.”

“And how do we persuade her?” says Lirianne.

Merisiel pauses for a second “She likes handsome men,” she says.

Seltyiel strikes a pose and strokes his chin.

They all turn to Valeros.

Merisiel laughs and punches him playfully in the shoulder. “You will be fine,” she says, “She likes them a little rough around the edges!” 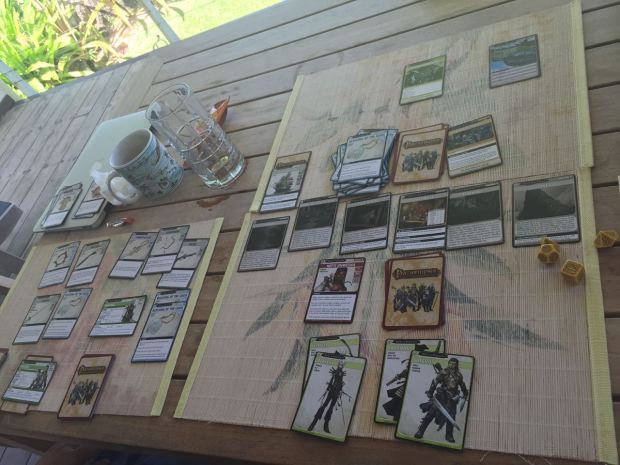 Part of our game layout. This was back in September, in Kauai.

This is the second adventure in the Skull and Shackles piratey game.

In this adventure, our intrepid heroes are stuck in port, and must use their charm to convince Nefti Unwesha to allow them to leave. She is the owner of The Mermaid’s Bucket tavern, and is the Villain in this adventure. 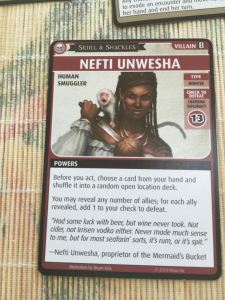 Nefit Unwesha is the villain in this adventure. Her Charisma check of 13 is hard to beat.

What is different about her is that she cannot be defeated in combat, but only by a Charisma check. The heroes must talk their way of of town.

This makes the whole adventure quite difficult, as only Valeros has a decent Charisma skill, and even his is not great.

In addition, the party is assaulted by a series of Ruffians and the usual bunch of nautical adversaries as they try to find her.

There was a confusing rule about what happens to Allies as you discover them. You kind of store them up and can use them to help your roll. However, mostly they are more use for their actual abilities, so we gave up on that and just used them as normal.

Eventually, the heroes did win out. Nefti agreed to let them leave port, and they set out into the Shackles archipelago in search of further adventure…