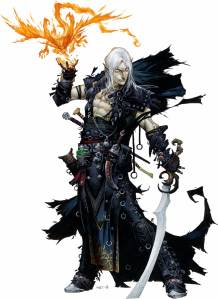 Seltyiel raises his hands and takes a slow step backwards. The rapier point follows his movement, inches from his throat.

The alleyway is dark. Moonlight shines on the roof tiles, but shadows hide the features of the ruffian brandishing the sword.

“Time to pay up,” the thug snarls, “We don’t like people trying to avoid our ‘taxes’!”

Three more sinister shapes sidle out of doorways and three more blades glint in the darkness.

Seltyiel flexes his fingers slightly. Faerie-fire flickers on his fingertips as he watches the sword-points advance towards him. His back presses against the rough wall and he prepares to strike.

Suddenly four sharp cracks echo around the alley. The bitter smell of gunpowder fills the air. Four bodies slump to the ground.

“Not bad if I say so myself,” comes a voice from the rooftops, “Four out of four, and in the dark too!”

Seltyiel relaxes. “Where have you been?” he says, “I’ve been leading them around for hours.”

Lirianne drops lightly to the cobblestones and holsters her flintlocks.

“Stop fussing,” she says, “You are being like Dad.”

Seltyiel grimaces. “Why do you keep saying things like that?” he says, “Just because you were old enough to know him before he left and I wasn’t.”

Lirianne hooks her arm around his neck and rubs her knuckles into his scalp.

“Come on,” she laughs, “Let us get out of this miserable port. I am sick of the smell of fish.”

Seltyiel returns from the bar, two frothing tankards in his hands.

“The barkeep says a merchantman docked only today,” he tells Lirianne as he hands her a drink, “It has a new crew, narrowly escaped from a pirate attack.”

He sits and blows the foam off his ale. “They are recruiting,” he says.

Lirianne puts her tankard down untouched. “A new crew?” she says, “I am unsure of this.” She glances around the tavern, where numerous shady characters are conducting numerous shady deals. “I would prefer a ship more seasoned, especially in these waters.”

Seltyiel takes a long draught of his beer. “I don’t know what choice we have,” he says, “Our funds are low and we cannot book a berth. We shall have to earn our passage.”

“Pfft!” snorts Lirianne, “Bodyguards to a greenhorn captain venturing out into The Shackles? What could be more dangerous?”

The next morning, the half-elven siblings stand at the foot of the merchantman’s gangplank and survey the ship. The crew looks busy. At the ship’s wheel, a heavily-armed warrior and a slim elven woman in leather are arguing over a map.

Seltyiel smiles ruefully, “Well, you did ask how it could be worse!” 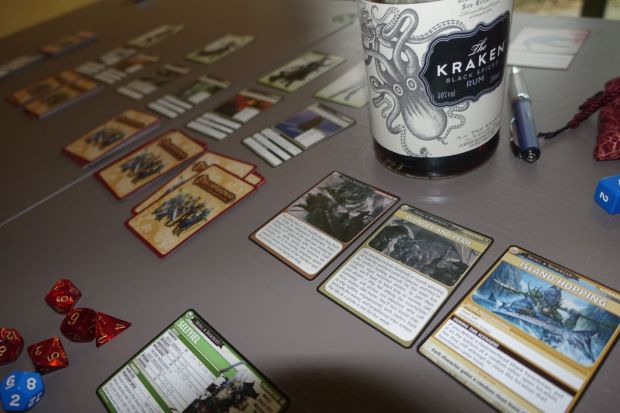 Pirates and a Kraken

Gab and I played our first two games of Skull and Shackles. We played with Valeros the Fighter, Merisiel the Rogue, Seltyiel the Magus and Lirianne the Gunslinger. Gab played Valeros and Merisiel and I played Seltyiel and Lirianne.

To get into the mood of piratey-goodness we even had some grog, i.e. rum punch, made from an authentic caribbean recipe and on-theme ‘The Kraken’ black-spiced rum!

We played the first scenario in the base set, ‘Island Hopping’. In this adventure you explore the islands of The Shackles archipelago searching for the evil merfolk pirate captain and try and steal his ship.

We kind of won the first game although it was a bit of a fudge, so we played it again and won properly.

In the first play we made some poor strategic choices and missed some beneficial power effects due to me forgetting rules.

One bad choice was to head straight for Shark Island which was obviously the toughest location. You have to fight a hammerhead shark every turn you are there.

The reasoning was that in most games the tougher the location the bigger the rewards, but that doesn’t apply in this game. A tough location is just tough. You have to explore it in case the villain is hiding there, but you really hope it isn’t. Exploring other locations with more treasure is probably best.

We also didn’t focus on making sure that whoever was at each of the islands had the best skills to close that location if we defeated a henchman. This meant we failed to close off one island and so had to waste time clearing out the entire location to get another chance.

Compared to the Rise of the Runelords set it is nice to have new characters to play and also lots of new monsters and items. Plus the pirate theme is cool.

The ship rules aren’t too complicated, which had been a worry for me.

Basically, whoever’s turn it is, they are the captain of the ship for that turn. If you encounter another ship, you can battle the other ship.

If you take damage in this battle your ship is wrecked and you lose plunder.

If you beat the other ship you win more plunder, and can sometimes seize their ship and it becomes your new ship.

Plunder is just regular good stuff (like items, weapons, etc) stored with your ship and which you get to keep if you protect it until the end of the game. So, if you look after your ship you can get extra treasure on top of what you find during the normal play of the game, and this adds a nice extra element.

In our second game, Seltyiel both fell overboard early on and ended up in a series of protracted ship-to-ship battles before finally defeating and seizing an enemy ship, The Truewind. This is now the heroes’ new ship for the next game.

Also, we won the game on a very narrow dice roll of exactly 15 versus the villain Adaro Barbarian’s check to defeat of 15. Lirianne unloaded both pistol barrels in his face.

Lirianne uses up her pistol to roll an extra die

I did my usual trick of forgetting rules until halfway through the game. This time it was having to discard cards down to your hand size at the end of the turn.

Interesting. I just re-read the ‘end of turn’ section in the rulebook and found another rule I had completely forgotten. You are allowed to discard any number of cards from your hand before resetting your hand at the end of your turn. I had completely missed this in all the games I have played. It is quite a good rule, as it allows you to get rid of dud cards and draw replacements.

It is important because one problem Gab had noticed with Merisiel was that she kept ending up with cards that did not get discarded or refreshed and so she stagnated a bit. Being able to discard one or two of these would have restarted her deck again.

It is a bit of a risk to discard a card when you don’t absolutely have to, since technically you are losing a hit point, but if your hand is stalled it may be useful.

Even though the game only lasts about an hour and each turn is fairly simple (you essentially just turn over a card and roll some dice to see what happens), playing this sort of game does require some pretty heavy concentration.

The blessings deck acts as a very visible clock ticking away and you constantly feel under pressure to get those locations searched and that even small mistakes can be costly.

After the first game, Gab described her head as ‘fizzing’ which does pretty much capture the feeling, but she did love it.

Next we will be moving on to scenario two, ‘Rum Punch’, where we will be anchored in port and fighting off ruffians in various bars and taverns!