“Better luck next time,” sneers Tresa, holding the cup up to the light. An eerie sheen gleams on its surface.

Jake eyes the half-dozen gun-barrels levelled at his chest. “You don’t understand what you’ve got there,” he says.

Tresa hands the cup to one of the soldiers. “Put this in the plane and prepare for take-off,” she says. The soldier clicks his heels and runs off.

She turns back to Jake.

“You were a worthy opponent,” she says, “How do you Americans say, a jolly good sport?”

“No, that’s the Brits,” he says through gritted teeth, “but I’ve got another saying for you.”

Tresa laughs, “I expect you do. However, I do not have time to stay and listen.”

The cargo plane’s engines start up with a roar. Birds scatter from the nearby trees. Tresa starts towards the plane.

“I have an appointment with some armour in Peru,” she calls over her shoulder, “Sadly, I do not think you are invited!”

This is my first new play-through of Fortune and Glory. Four heroes vs the Nazis.

Clearly I am missing an important part of the strategy, but I suppose in cooperative games like this I should expect to get thrashed on my first couple of plays.

The Artefacts are made up of the artefact name and the adventure description, so they are different every time

One of the things I like about this game is how they use two sets of cards to make up the artefacts that the heroes are chasing. One set of cards is the artefact ‘object’ and the other is the adventure ‘story’.

In this game I had:

“The Hammer of the Sacred Stone”

“The Shield of the Gods”

“The Book of Atlantis”

“The Armour of Illusion”

“The Cup of the Monkey God”

I totally want a Cup of the Monkey God. Beats a Holy Grail any time.

The two cards also have numbers on them for game effects. The artefact card has a fortune value, and the adventure card has a difficulty. This gives a nice randomness to each one.

The difficulty of an artefact is the number of danger cards your hero has to beat to win the artefact.

If you mess up a roll to beat one of the dangers, you have to end your turn and wait for your next turn to try and beat the cliffhanger on the back of the danger card before you can continue. This is a delay you do not want.

The Nazis kind of ‘parachute’ in directly at the location of the best artefact and each turn roll to add up ‘danger’ points until they win it. They don’t use the danger cards.

The heroes have to run around the world and beat the Nazis to the artefacts. What makes it difficult is that the heroes can be delayed by cliffhangers, and also when they do win an artefact they have to go to a city and sell it to score the fortune for it, so that is another turn to spend. 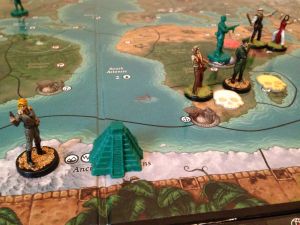 Tresa explores the Temple in the antarctic Ancient Mountains

For a four-hero game, there are two Nazi villains and the Nazis have to score 15 fortune points of artefacts. The heroes have to score 40 points. An artefact is worth about 5 or 6 points on average. So that is 3 artefacts for the Nazis and 8 for the heroes, or 1.5 per Nazi and 2 per hero.

The Nazis roll dice to search for the artefact. Typically 3 or 4 dice each turn. If they get a 4, 5 or 6 on a die then they overcome a ‘danger’, so they would average 2 dangers overcome per turn. Artefacts have on average 4 or 5 dangers, so that would be 2 or 3 turns for a Nazi villain to win an artefact.

So if the Nazis spend 2 or 3 turns per artefact for 1.5 artefacts, this gives an average game length of about 4 turns before the Nazis win.

This isn’t very long. In the absolute best case, if a hero wins an artefact on the turn they attempt it, they then have to spend the next turn selling it to get the points. That is 2 turns per artefact for 2 artefacts per hero, which is (again) 4 turns. If a hero fails a danger roll and has to wait a turn on a cliffhanger, then this is a major set-back.

There are loads of things to do in the game, but not much time to do them. My game only lasted 5 turns.

The main strategy must be to slow down the Nazis.

You can do this by crowding them, which reduces the number of dice they roll to search for artefacts.

Or maybe you can save time by selling a bunch of artefacts in one go.

Also, destroying a Nazi outpost allows you to steal an artefact or fortune points, so that is probably a good idea.

I can try some of these tactics in the next game.