Lost Cities is a nice two-player card game. The theme is as thin as the plastic wrap around the box but the illustrations are beautiful.

The idea of the game is that each player is an explorer trying to outdo the other. There are five expeditions and you make progress by playing matching cards of higher and higher scores in a pile on your side of the board. Your opponent has their own set of five exploration piles, competing with yours.

The board, with spaces for discards in each of the five expeditions.

When the deck runs out, you count up all the scores on all the cards you have played in your five piles and subtract 20 from each pile. You can have a negative score for a pile if you don’t have many cards played on it. All this is added to your total. Highest total after three rounds wins.

Each expedition has cards from 2 to 10. There are also four investment cards for each expedition which each double your score, but have to be played at the start of an expedition. Doubling a negative score is very bad.

Each game plays quite quickly, and doesn’t really have much feel of exploring. The way the cards are numbered makes me think the game was prototyped with a regular pack of cards, taking the 2 to 10 from each suite and the AKQJ as the four investments.

The cards themselves are beautifully painted. Each set of exploration cards fits together to make a single larger picture of a journey and eventual discovery. You rarely see a full set played in one game but the individual cards do overlap, so you can often make up most of the picture using the partial set you would play on one side of the board.

Here are the five expeditions laid out to show their whole journey: 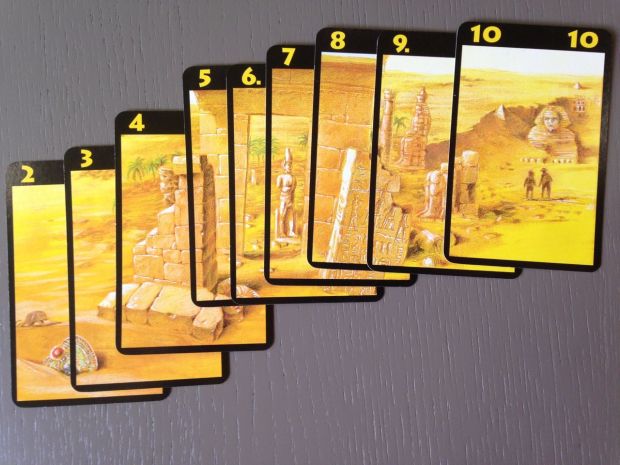 Expedition in Egypt. The Sphinx.

Expedition in the Amazon. Mayan Temple.

Expedition to the bottom of the sea. Underwater ruins.

Expedition to a volcano. Viking Henge.

Expedition to the Himalayas. Tibetan Monument.