I started playing D&D back in the mists of time with the boxed basic set in 1978. I remember my friend DMing an adventure where my first level character faced a 15th level purple worm in the second room.

I still have (most of) that set, along with the three Advanced D&D rulebooks that came shortly after. I played AD&D from 1978 through to 1987, interspersed with other rpgs.

More recently, the Dungeons & Dragons Boardgames (Castle Ravenloft, Wrath of Ashardalon, and Legend of Drizzt) were all based on the new 4th Edition. 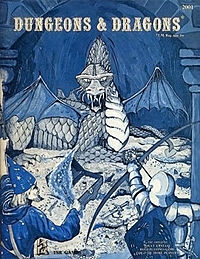 Now I am interested in how Pathfinder fits into all this, so I thought I would do a review of all the versions I have played in some form or another, and compare how they are all related.

First came the original D&D in 1974. I never played this, but my friends had these books. They had been playing it before introducing me to the game. I remember asking my friend how to play and he said, “Well, you have this twenty-sided dice and, er… its too difficult to explain.”

I got the Basic D&D boxed set as a Christmas present. This was a simplified set of rules for low-level characters (so why the purple worm in the monsters section?) Fighters were called ‘Fighting Men’. I didn’t actually play this much because Advanced D&D (nowadays referred to as ‘1st Edition’) came out around that time, and obviously I wanted to play the ‘advanced’ version.

This was essentially the same game, but with a million fabulous tables and charts. There were new classes (paladin, ranger, druid, assassin, monk, illusionist) and rules for everything you could want. This was the game I played. I had two successful, long-lasting characters, a gnome fighter-illusionist who killed the sun-god Ra, and a warhammer-wielding paladin who was crushed under a stone block and then raised from the dead. 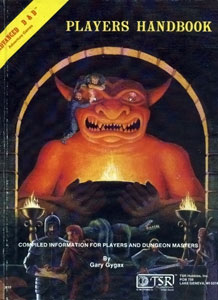 AD&D 1st Edition was written by Gary Gygax, who had written the original D&D with Dave Arneson back in 1974. It came out in 1978 and was pretty much a compilation of all the add-ons and variants that had accumulated since it all began. It lasted 12 years.

In 1989, they brought out AD&D Second Edition. By then I had stopped playing D&D, so I never played this version except in the Baldur’s Gate computer game. The Second Edition had been cleaned up by the removal of all the ‘nasty’ stuff, such as half-orcs, assassins and demons, presumably after pressure from idiot Americans. It also introduced the revised To Hit Armour Class 0 combat system and non-weapon proficiencies, which were the precursor to skills.

The change to 3.0 in 2000 was a big one. They overhauled the entire game and replaced all the complex percentage tables with the much simpler d20 system. Everything, not just combat, was a d20 roll with bonuses versus a target number. Armour classes went up instead of down. You now had character customization with feats and skills. They introduced the sorcerer class which had a cool flavour and did not have to prepare spells in advance. Higher level characters could specialize into prestige classes. I really enjoyed playing this version in Neverwinter Nights. 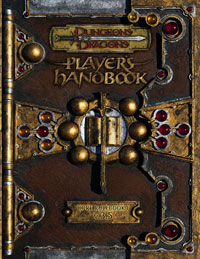 They hadn’t quite got this big change right, so in 2003 they brought out a tweaked version called 3.5. This was the same as 3.0, but with many fixes and modifications to the classes, etc. This version was very popular. It was used in Neverwinter Nights 2, but I didn’t really notice the difference.

Wizards of the Coast, who owned D&D, had released the core 3.0 rules as an Open Game Licence which allowed third parties to create their own games and materials based on the D&D d20 system. They did the same with the 3.5 rules. This was all really cool, as it meant an explosion of supporting content.

Then, in 2008 they released 4th edition. This was controversial because it was drastically different from 3.5, being more of a tactical grid-based combat system than a free-form role playing system. I knew nothing of this, having paid no attention to it at all.

I played the Castle Ravenloft boardgame in 2011 before ever seeing the 4th edition rulebooks, and I thought the boardgame rules were excellent for moving figures around the game board. I was surprised to find essentially the same grid and powers system in the role paying game, with healing surges and all the rest. 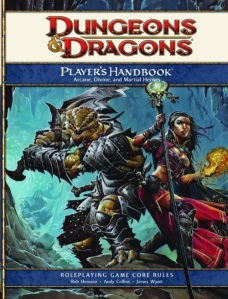 In 4th Edition almost everything, including spells, had become a type of power to ‘play’ during combat. You needed miniatures and a grid map to play on. It seemed most of the rulebook was about combat and things you can do during combat. The class archetypes had been overhauled, with some removed and new ones added that I did not recognize.

It was all much simper than the old versions, which was great, but it seemed to have lost something of what made D&D ‘D&D’ for me. On the other hand, I was never going to play it so no big deal.

When Wizards of the Coast brought out 4th edition, they provided no migration path from 3.5 to 4th Edition. This meant you couldn’t use any of your 3.5 characters, rules, add-ons or adventures in 4th edition. They also stopped producing any material usable in the 3.5 system. It was 4th Edition or nothing.

Except it wasn’t. A company called Paizo Publishing had been producing content for D&D since 2000. When Wizards decided to stop supporting the huge existing 3.5 user base, Paizo stepped in and, using the Open Game Licence, produced their own version of 3.5 called Pathfinder. 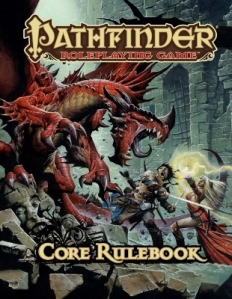 Pathfinder was launched in 2009. It is backwards-compatible with D&D 3.5 and hence all of the existing adventures, modules, add-ons, etc. It streamlined and balanced some of the classes and rules, and has become very popular. Some industry estimates put it ahead of 4th Edition in sales.

Wizards are now developing D&D Next, which has been in beta test throughout 2013. It is slated to be more like 3.5, dropping many of the 4th Edition features. This may be good, and more like my old D&D, but it will have to compete directly with Pathfinder for the ‘compatible’ market.

(Notice how I use IT terminology when discussing D&D? That’s because roleplaying games are operating systems.)