Stephenson has not returned.

Today the temperature dropped below minus 40 and the blizzard brought visibility to zero. Stephenson left before dawn, I heard the dogs barking as he passed them. It has been nearly six hours and he is certainly dead. He was weak and we are better off without him.

Now there are only three of us remaining out of the initial expedition of twelve. Atkins is trying to fix the radio and Kristof continues to complain about the lack of darkness. The Antarctic nights last under three hours and are a dim twilight at best.

Kristof insists that if he could survey the stars he could predict the correct time of the interstellar transmigration, but I am confident in my calculations. The manuscripts do not lie. In a mere five hours the portal will manifest. I will place the shining trapezohedron into the rift and the gateway to Yith will be joined. The triumphant Yithians will descend from the void and reclaim the earth they abandoned millennia ago, and we few shall be championed as their heralds and gatekeepers and granted all the glories we deserve.

There is only one hour to go. Kristof grew increasingly stubborn regarding the time of the epiphany. It is ridiculous to think that the beings of an eons-old transdimensional civilization would adhere to a calendar derived from the annual cycles of a remote planet. In the end I had to strangle him.

Gunfire. Those heathens from Miskatonic University have found us. Atkins is dead. It is a shame that Podolsky fell into the crevasse last week. At least he was a good shot.

I should have destroyed the University’s copy of the Pnakotic Manuscripts when I had the chance. I expect it was Armitage who dechipered the runes. He is the only one with even the slightest inkling of how to follow my calculations.

The rift epicentre is only is few steps from this tent.  The time of the manifestation is almost here and the trapezohedron is starting to glow. The snow is gusting again and will cover me if I make a dash for the

“They were insane, but they nearly did it,” says Starkweather, tucking the diary into his coat.

Moore crouches by Whateley’s body and wraps the glowing red crystal in furs, “We arrived just in time,” he says, “We need to get this thing out of here before any residual energy spills over.”

Starkweather nods, his breath steaming even inside the tent. He points at the fur-wrapped bundle, “Where do you think it should end up, in the Special Collection or dropped into the ocean?”

Moore grins through the ice on his beard. “That’s not up to us, is it?” he says, pushing open the tent-flap and stepping out into the snow, “We’ll ask Armitage as soon as we’re back in radio contact.”

Starkweather follows him out to where Lake and Danforth are preparing the dogsleds for departure. “Let’s get going,” he says, “There were rumours from the Astronomy Department of a possible ninth planet beyond Neptune. I’ve had enough of cultists and alien invasions. Investigating a new planet sounds much more peaceful.”

I built a Miskatonic University deck from the Seekers of Knowledge expansion.

This has a theme of Explorers, who are more adventurous than the usual MU professors and students, and lost civilizations.

The usual design for a MU deck is Investigators who tend to have lots of investigation icons and mix well with the Agency. For this deck, I will go with Explorers, along with some overlap in Student and Faculty members. I’ll add in a couple of the new prophecies to see how they work.

Two example explorers. They have effects that boost all explorers (including themselves), and also things that happen when other explorers enter or leave play.

In addition to the explorers themselves, there are cool support cards which help them.

One such is Station Eismitte. This protects your explorers from some of the more annoying effects of your opponent’s characters.

However, I think the best is the ancient lost polar civilization Ultima Thule. This pops an explorer into play as a surprise and then bounces him back again. This can be great for messing with stories but is even better when mixed with the explorers’  entering and leaving play effects. 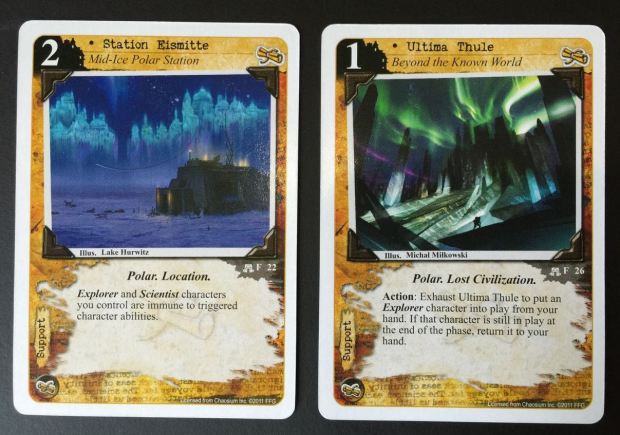 For example, suppose I have Roald Ellsworth in play. I use Ultima Thule to play Brette Wulffsen. Because this is a card effect, I get to play Matthew Alexander for free from my hand. Then, when Brette is bounced back to my hand I get to draw cards from Roald’s ability. And I get to do it again the next turn.

There is another explorer called James “Cookie” Fredericks who lets you draw cards when an explorer enters play. All these together mean a whole load of extra cards!

Here is the decklist: