I built my new Cthulhu deck from The Sleeper Below expansion and tried it out against my Yog deck. The Yog deck hadn’t been doing very well, and the Cthulhu deck is only my first version, so hopefully they should have been able to square off against each other.

It was a pretty fair fight. 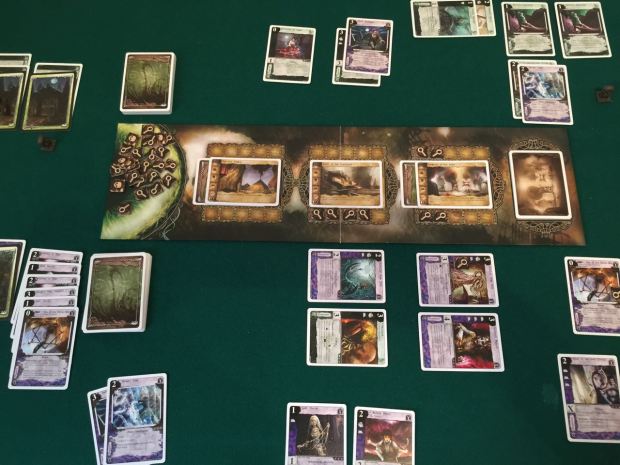 In this game, the Yog player won by winning two stories in one turn after overwhelming the Cthulhu player and knocking out key cards with a Dark Passenger and Frozen Time.

Dormant cards are quite scary sitting under a story. If the Cthulhu player gets a couple in his opening hand, he can put them under two stories for free on his first turn and then they both have booby-traps lurking in wait.

However, as an opponent you can kind of play around the dormant cards.

One obvious way is to just leave them alone and to focus on the other stories. The problem with this approach is that eventually the Cthulhu player plays a third dormant card and then all the stories are trapped, so this strategy only lasts so long.

Another way is to put a bunch of success tokens on the dormant stories but not to win them yet. The plan then is to win them in quick succession even with Cthulhu rising and the skies falling around you, etc, etc.

A third option, which requires a little luck with the stories, is to win the story ‘Come the Dreamtime’. This allows you to switch the stories around while leaving all the success tokens in place. This way you can move a story without a dormant card onto your pile of tokens, ready to win quickly. A similar story is A New Challenge, where you redistribute the success tokens amongst the stories.

In one of my games, the Yog player won The Seventh Gate story. This lets you pick another story from the story pile and act as if you just won that one, so he got to chose Come the Dreamtime.

Winning this story lets you mess with the story cards which helps deal with dormant cards.

I did manage to get Cthulhu to wake up in one game and he was pretty devastating, wiping out absolutely everything else so that there was only him left in play.

The only problem with Cthulhu being on his own was that I couldn’t immediately use him to win a story as I had to keep him in defence. The Yog player had four success tokens on two stories, so he could win them unopposed if I wasn’t careful. Because of this I can see an argument for not destroying everything when Cthulhu arrives.

I made some changes to the Cthulhu deck after a couple of games.

These were in a similar vein to the changes to the Yog deck, in that the deck needed more characters, and tougher ones. Both Cthulhu and Fiona Day are really only intended to be played as dormant cards. I decided to add in three Black Winged Ones as they are cheap, have combat and are invulnerable.

The Black Winged One was too devastating to the Yog deck because it prevents cards going into the discard pile. The Bone Sculptor is less nasty.

I then discovered that the Black Winged Ones broke the Yog deck entirely. They have a special power that makes opponent’s cards go on the bottom of their deck instead of into the discard. No cards in the discard means almost all of the Yog cards’ effects are ruined.

The Yog player tried to counter the Winged Ones by putting Frozen Time on them to blank this effect, but then the Cthulhu player just sent them to a story where they went insane, at which point the Frozen Time fell off. When they recovered from the insanity their effect just kicked in again.

This spoilt the game, so I took them out and put in some Bone Sculptors instead. These are cultists who can steal opponents’ characters from their discard pile. This is still a bit of a nerf on Yog’s discard effects, but not as bad because they are more expensive and you have to pay to use their effect.

The Cthulhu deck has two very powerful support cards in the form of the Horrific Statuette, which can change the icons of a cultist into any icon I want (such as badly-needed investigation), and the tome Unaussprelichen Kulten, which lets me play cultists from the top of my deck. Cultists really are a major theme of this set. 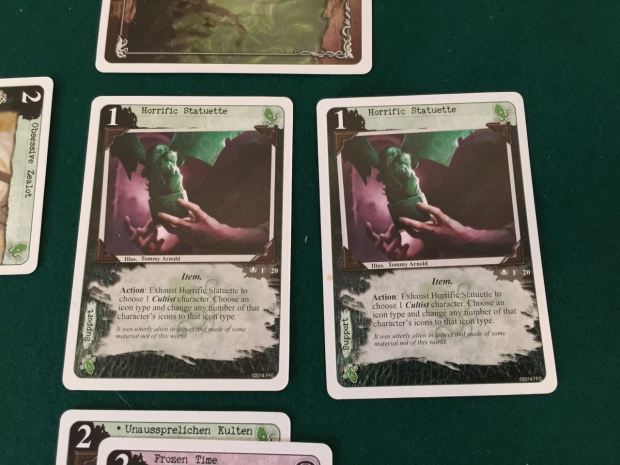 These two Horrific Statuettes let me pretty much change my cultists’ icons into anything I want. Notice that the Unuassprelichen Kulten was allowing too many cultists into play and so got hit by a Frozen Time.

Here is the updated decklist:

I am building up a nice bunch of faction-themed decks, so if I set up a couple more I can start a little tournament.

Next up, revisiting the Seekers of Knowledge expansion to build a Miskatonic University deck.