The board is modular, so every game is different, and there are scenarios for competitive, semi-competitive, cooperative and even solo play.

It comes with a million bits and pieces, which look so much fun. There are figures for your heroes and the cities, plus special dice, various tokens and chits, many many cards and some pretty plastic mana crystals. 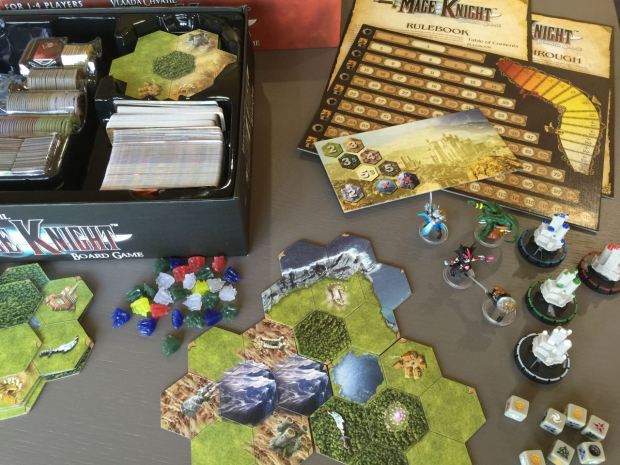 I had a go at reading the rules and I have to admit there are as many of them as there are components. Happily, they have split the rulebook into two. The first is a walkthrough of your first adventure and introduces the main rules as you go. The second is the rulebook proper and is used for reference and the full game. It also has all the scenarios.

This game has a reputation for being hard to learn. Glancing at the rules I can see how this can be. However, I think this game is less an overly-complicated boardgame and more a fully immersive and complete fantasy world to lose yourself in. Much like the mind-melting Android or flavour-rich Arkham Horror. Gab does like games like these, so maybe this could be fun.

My plan is to run through the introductory adventure on my own with a couple of heroes to see how it goes.

The figures are quite nice. I might smarten up the heroes, and the castles are a bit plain and could use a little work, so this could be a nice painting project. I haven’t done any painting in a long while.

This game is one of the top ten games on boardgamegeek, currently sitting at No. 9 in the all-time chart which is promising. For comparison with other games I play, Android Netrunner is No. 6, Eldritch Horror is No. 27 and Pathfinder Adventure Card Game is No. 67.

The name “Mage Knight” did sound familiar and it turns out this game is from the same world as the old Mage Knight ‘hero-click’ miniatures game, from around 2000. This was a fantasy tactical wargame with collectible armies that used the rotating click wheels in their base, just like the superhero ‘hero-click’ miniatures that are still going today. I never got any of the original Mage Knight figures, but I did get a couple of sets of the follow-up Mage Knight Dungeons game. This was a great early dungeon-crawl game. It had little plastic treasure chests with random wheels so you never knew what you would find in them.

In case you (like me) were wondering who, where or what a Vlaada Chvatil is, he turns out to be the game designer.