After making a mess of the setup of my first two games, I paid more attention when setting up the third. This was the China Shop mission, where you have to lure the huge berserker through to the last tile and hit it with the Hammer of Dawn beam weapon. 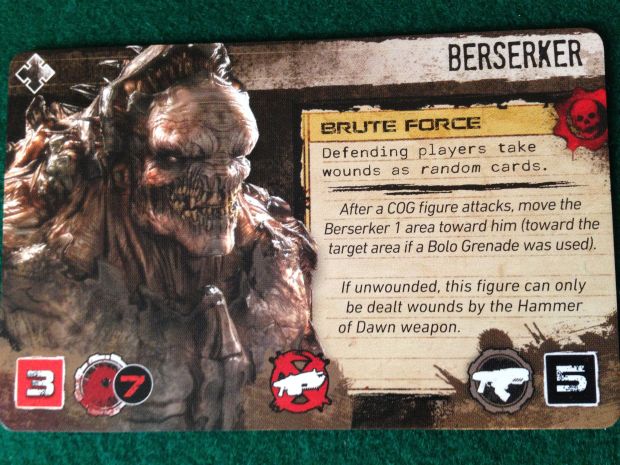 The berserker is pretty scary because it starts right next to you, is invulnerable, and can do five dice of damage. You can try and avoid it, but it follows you every time you make an attack.

The only thing that can wound the berserker is not a holy hand grenade, but the special Hammer of Dawn weapon. This is waiting for you at the very end of the third level, so you have to keep running and leading the berserker after you.

What is neat is that when the berserker attacks, it attacks everything in its area and this can include other locusts. This makes it possible to run past a bunch of drones or wretches and when the berserker follows it can kill them for you. 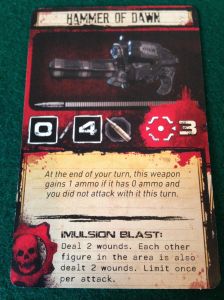 In my game, I had a bit of a problem at the end once Dominic had grabbed the Hammer of Dawn. The berserker kept moving into Marcus’ space every time he had to shoot a drone or wretch, even though he was running around the room. You can’t really use the Hammer if another COG is in the same space as it can take them out as well. Eventually Dominic used a ‘slaughter’ order to make two attacks; one to move the berserker one area away from Marcus, and the other to hit it with the Hammer and do the first wound.

Once the berserker is wounded it can be hurt by regular weapons. Marcus then used a ‘blind fire’ order to attack it twice. The first attack did another wound, and the second attack did the final 3 damage needed to kill it.

This is a really fun mission with a very different feel. I think I could have done a lot more manipulating of the berserker’s movements using grenades and maybe positioning the two COGs opposite each other to bounce it back and forth. I might try that next time.