Rumblings are felt around the globe. Azathoth stirs in his cosmic slumber. Diana Stanley the Redeemed Cultist and Trish Scarborough the Spy travel the world to solve the mysteries and prevent Azathoth from awakening. 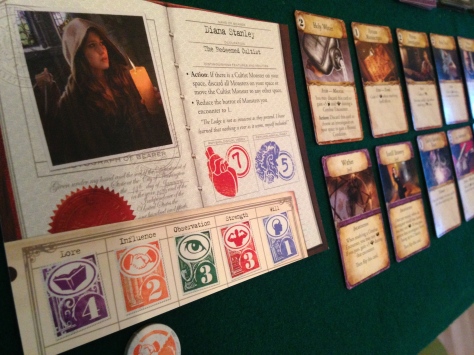 They are doing quite well. Two mysteries are solved, Diana has gathered quite an arsenal of items, and Trish has been clearing rumours. Suddenly a series of Reckonings hits and Trish gains madness after madness, eventually ending up in the asylum.

Mark Harrigan the soldier steps in. Trish mumbles her story to him and he sets off with her clues to solve the third mystery.

The eldritch token is waiting on the mystery card to win the game, but the mythos card has the omen symbol.

Time is ticking and he manages to locate the Eldritch Token and spends the two clues needed to place the token on the mystery card. This would solve the mystery and win the game, but not until the end of the mythos phase.

The mythos card is drawn. It has an omen symbol. The doom token moves only one space, but that is enough. The doom track is on zero and the investigators lose.

Lily Chen the martial artist and Jacqueline Fine the psychic take up the reins for another attempt.

They focus on the mysteries. Each turn they head for clue tokens, relying on Jacqueline’s ability to trade clues to make sure they are with the investigator who can use them best. They have some trouble with the mystery requiring them to close a gate matching the omen track. It requires some timing to make sure they are at the correct gate without having waste time waiting in one place.

They spend every spare action acquiring assets. This becomes especially important when a rumour makes the assets fade from reality.

The third mystery is again The True Name, requiring them to spend two clues to place the eldritch token on the mystery. The investigators are short of clues, but Jacqueline uses her psychic ability to read a clue from Lily’s mind half-way around the globe. She picks up a clue of her own and then rushes to the eldritch token’s location in North America. This takes two turns, and the doom track drops to space 2.

Jacqueline uses her encounter to place the eldritch token on the mystery. Lily waits anxiously in London. They have to wait until the end of the mythos phase.

The mythos card is drawn. It has an omen symbol. The omen track rotates, but there are no open gates with a matching omen. The doom track stays on space 2. The third mystery resolves. Jacqueline speaks Azathoth’s true name and the investigators are victorious.

Both games were very close. Once the doom track gets to about space 8 it very quickly counts down to zero. If you are not already close to the third mystery, you can easily run out of time to even get to it, let alone gather the clues needed to solve it.

Once again, assets proved to be very beneficial. They can round out your skills, which is vital when you have only two investigators.