The climb is steep as they approach the Thistletop peak. The ruins stand stark against the fading sunlight.

“This Nualia is an outcast from the town,” says Lini, “Perhaps she simply wants revenge.”

Seelah nods, “This is bigger than just Sandpoint. She needs to be stopped.”

Sajan holds the crude map that the goblin had scrawled. He points at the entrance to the dungeon complex that lies under the ruins. There is a faint sound of chanting. The summoning ritual has begun and there is no time to lose.

Seelah heads straight for the Throne Room. It is dark and decayed. As she enters, a Skeleton Horde erupts from the bone-strewn floor and Ancient Skeletons attack the entire party. Skulls, ribcages and knucklebones fly as they fight them off.

There is movement amongst the columns, and an Enchanter surprises Seelah with a force blast, smashing her Shield away.  Her arm is numb but Seelah manages to swing her warhammer and knock the Enchanter backwards. The sorcerer flees into the dark, but sends a fireball behind her which burns away Seelah’s spear. 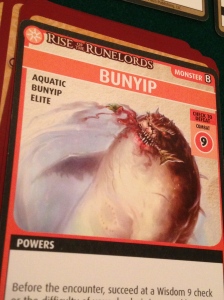 Lini explores the Thassilonian Dungeon. A Bunyip is guarding the main passageway, and even Smilo the tiger cannot defeat it. Before it can eat them, Lini and Smilo run off down a side passage that is too narrow for the Bunyip to follow. They hear it stomping off into the dungeon. They hope they do not meet it again.

In the Deeper Dungeons, Amiri has found nothing but dust, and is looking for something to fight. She feels something brush past and notices her mattock is gone. She hurls her warhammer into the dark and hears a yelp and a squish as it connects with a Goblin Cutpurse. The mattock is nowhere to be found. She angrily brushes cobwebs out of her face and continues down the corridor.

Sajan is stealthily searching the Goblin Fortress. He spies a captured Soldier imprisoned with a circle of Explosive Runes. He safely breaks the circle and frees the grateful Soldier. They explore together and find the Goblin Raider henchman and his Goblin sergeant at the top of the fortress. The Soldier is nervous, but Sajan calmly punches them both over the parapet.

Seelah leans against a column and grits her teeth. Her arm aches and her skin is burned. She casts a cure spell to heal her wounds, then draws her longsword.  There is growling coming from behind the tattered tapestries. Lifting a moth-eaten banner, she finds a bugbear trying to eat a suit of plate mail. It chokes on a gauntlet and she lops of its head.

The Bunyip is still searching for Lini, so she uses an Augury spell to avoid it and ventures further into the Thassilonian Dungeon. She turns a corner and a battered-looking Enchanter force-blasts her into the wall. Lini is dazed but her snake whips around the Enchanter’s neck. The sorcerer collapses, lashing out with a fire burst that fills the corridor. As the smoke clears, Lini struggles to her feet. The noise may have attracted the Bunyip, so she limps onwards.

Sajan and his Soldier leave the Fortress and enter the Dungeon to help Lini. Before they can find her, the evil mercenary henchman Orik Vancaskerkin steps out of the shadows and challenges them.

Sajan and the Soldier charge but Orik is too fast. The Soldier falls, and Sajan has to retreat before the fighter’s flurry of blows. Vancaskerkin laughs derisively and strides away. Sajan tears a strip off his robe and binds his arm. His eyes are grim.

Orik is heading for Lini. She is weak and casting cure spells to try and recover. Sajan follows and, before Orik can attack her, steps up and taps him on the shoulder.

Orik turns and grins. He brandishes his sword. Sajan hops from foot to foot. The fighter lunges, but Sajan drops and sweeps Orik’s legs from under him. The mercenary crashes to the floor and Sajan stuns him with a chop to the neck. He takes Lini’s arm and they stagger out of the Dungeon.

Amiri is covered in grime but happy. A Zombie and a Giant Hermit Crab have provided her with some sport. The Crab took two huge hits to break its shell. She is out of breath but glad of some exercise.

Sajan leaves Lini resting at the Temple and heads over to the Warrens.

Back in the Throne Room, Seelah can see light flickering by the dais at the far end of the hall. She creeps forward and finds the evil priestess Nualia on the throne holding a skull with a jester’s cap. Nualia looks up as Seelah approaches. 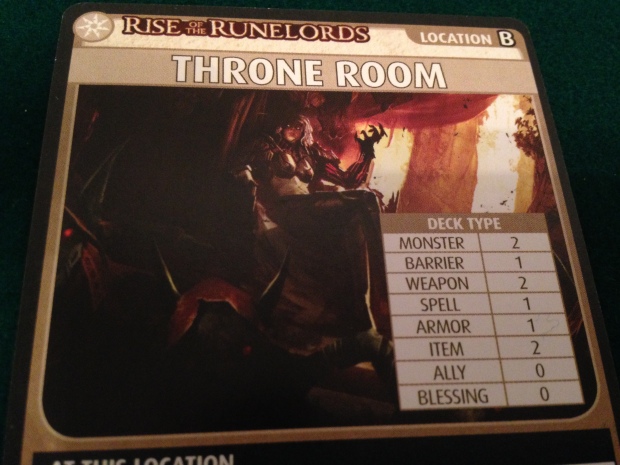 “I’m here to stop you completing the ritual,” says Seelah.

Nualia laughs and gestures with the skull at a pentagram on the floor. There are faint wisps of smoke floating above it.  “I did it thirty-five minutes ago.”

She steps down from the throne and tosses the skull to one side. The jester’s cap jingles as it rolls among the bones.

“Soon Lamashtu will arrive in this world, and I will be her vessel.”

An eerie light begins to appear in the pentagram. Seelah rushes forward.

Nualia laughs again and a wave of power surges from her fingertips. Seelah is thrown back into a column, the air is knocked from her lungs and she falls to the floor.

Nualia’s eyes have begun to glow. Seelah struggles to her feet. It is hard to breathe. Her weapons are gone. Nualia smirks and walks forward. Seelah calls on the Maker and swings at Nualia bare-handed.

The priestess is caught off-guard as Seelah’s blow connects. Nualia steps back, bares her teeth and prepares another force blast. Seelah leaps at her, catches her in the stomach and they tumble across the floor.

Seelah skids to a halt at the edge of the Pentagram, but Nualia rolls into the middle. There is a shriek and a crack of lightning and Nualia is gone. An acrid smell hangs in the air.

Seelah rests her forehead on the cool flagstones. Several pairs of hands help her up.

Lini’s tiger licks her hand. Sajan checks that the pentagram is now closed.

“Nicely done,” says Amiri, dusting her down. “I never figured you for a brawler.”