Amiri lifts her boot from the goblin’s throat.

They are in the foothills surrounding Thistletop, the mountain home of the goblins.

Seelah shades her eyes and scans the skyline. “That weird goblin druid has made his lair up there somewhere,” she says.

“Smilo wants revenge on Tangletooth,” says Lini, stroking her tiger’s ears. Smilo rumbles in agreement. He still has the scar from his last encounter with the goblin’s cougar.

Sajan is examining the ground nearby. He picks a blade of grass and looks at it closely. He stands, brushes his hands and nods at the mountain.

Amiri kicks the goblin and it scurries off into the brambles. “I say we get up there, kill him, and get back to the tavern before it gets dark.” she says, “I could do with a drink.”

Seelah approaches the Goblin Fortress. The goblins are using a Tickwood Boar as defence, but she easily defeats it. She finds a Magic Warhammer sitting in a weapon rack. The goblins clearly have no idea of its worth. 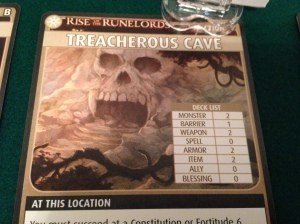 Lini ventures into the Woods. The leafy canopy blocks out the light, so she casts a Detect Magic spell which reveals Gogmurt the evil Goblin Druid preparing a ceremony in a nearby glade. Lini runs away and hides in a Treacherous Cave.

Amiri follows the whimpering goblin into the Nettlemaze. She ignores the needles and thorns, having lived with worse on the wild steppes of her childhood. 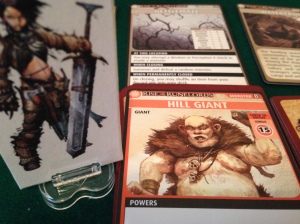 Suddenly, a Goblin Warrior runs wildly out of the undergrowth being chased by a Hill Giant. Amiri swings and the Goblin never knew what hit it. As the Goblin collapses in a heap, the Hill Giant trips over its body and Amiri smacks it over the head with her sword. The weapon splinters, but the Giant is dead.

Sajan scopes out the waterfront where the sea laps against the foot of the mountain. He is on form today, successfully fighting off a Ghost and a Werewolf, then dispatching a Goblin Raider Henchman and a Bandit Henchman to make the area safe. Barely out of breath, he sits for a moment and watches the waves come in and out.

In the Goblin Fortress, Seelah wades through the crowds of goblins until she confronts the Goblin Raider captain and his sergeant. They go head to head, but even these two are no match for a skilled Paladin.

Not wanting to return to the Woods, Lini inches her way further into the Treacherous Cave. Her tiger, Smilo, chases off a Bugbear, and Lini finds a Magic Shield lying amongst its treasure. The Cave is dark, so she casts another Detect Magic spell and finds Tangletooth, Gogmurt’s pet cougar, lurking around the tunnel bend. Smilo is still off chasing the Bugbear, so she huddles in a corner and wishes she was out in the sunlight.

Seelah joins Amiri in the Nettlemaze. Her armour is immune to scratches as she hacks through the knotted vines. A Goblin Henchman is busy negotiating an alliance with a local Warlord, but Seelah brings their discussion to a sudden end. 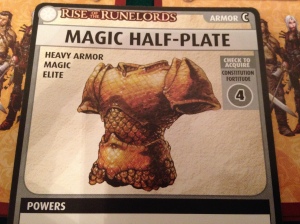 The Nettlemaze is safe, so Amiri advances to the goblin Guard Tower. Again, the goblins must not know magic when they see it; she finds a suit of Magic Half-Plate armour hanging on a peg.

The woods are getting darker as the sun sets. The shadows under the trees grow deep and sinister as Seelah approaches the clearing where Gogmurt has begun his ritual.

Lini is guarding the entrance to the Cave to prevent the Goblin Druid joining Tangletooth.

Amiri has fought back the goblins at the Guard Tower. Her shield is smashed but she has managed to bar the door. There is nowhere for the Goblin Druid to run.

Seelah steps into the glade, interrupting Gogmurt mid-chant. He snarls in frustration and blasts Seelah with his flaming dagger, burning most of her equipment and leaving only her sword.

She lunges at Gogmurt and connects, but the Goblin Druid is too tough to go down with one hit. He begins a new chant and prepares to attack with his fiery dagger. Seelah flings her longsword in a spinning whirl which sweeps him off his feet and into a tree.

“Your conjuring days are over,” says Seelah, picking up her sword.

“You are too late!” spits Gogmurt, “Nualia has already begun the Rite of Lamashtu. Soon she will rule this land, and we goblins will be her army!”

Seelah presses her sword point to his throat. “Tell me where this Nualia is,” she says.

Gogmurt hisses and points towards the ruins on the mountain-top. Silhouetted against the setting sun, the collapsed towers look like claws reaching up from the ground.

“I am not getting that drink tonight.” mutters Amiri.