Stirling skids around the corner and pelts towards the emergency exit. He slams into the door and swipes the stolen key card on the panel. The panel beeps at him disapprovingly.

“I hate on-premise datastores,” he mutters, “Why can’t everything be in the cloud where it’s easy to get at?”

Zoe’s voice pipes in his ear-bud.

“I can’t access the security seals on the door from here, you’ll have to hack them locally.” she says.

Stirling swings his backpack off his shoulder and pulls out his mini-console. “What’s going on behind me?” he asks.

“I’m accessing the cameras… I can see three Haas Corp-Sec units approaching from the south and west. 30 seconds out.”

“Can you keep them off my back while I do this?”

“Sure, Stirl. I’ll just distract them a moment.” 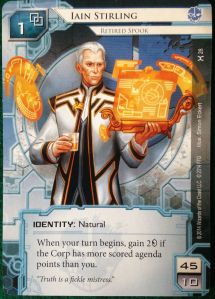 Zoe glances up at the Emo-Metal posters that decorate her loft-crib. She winks a black-linered eye at the looming image of Carl Drogo, lead singer of The New Crucibles. His pseudo-animated visage winks back.

“Let’s have some fun,” she says, stretching her fingers.

Stirling tries to concentrate on cracking the door panel. He blinks as water drips from the end of his nose.

“I’m getting too old for this,” he says.

“Hah!” Zoe chirps, “You ex-spooks love getting back in the field.”

Stirling’s console ICE begins to home in on the panel combination.

“Being in the field used to mean strangling terrorists,” Stirling says, wiping water from his eyes, “Not sitting in a shower playing with computers.”

“You never did tell me what you used to do in Covert Ops,” Zoe says.

Stirling shoves the mini-console back in his backpack and edges out of the door.

“Killed a lot of people. Saved the world a couple of times,” he says quietly. Searchlights sweep the grounds.

Stirling sprints across the manicured lawn and between the corporate topiaries. The searchlight beams skim by as he passes.

“Where’s the car?” he pants, ducking into the bushes that encircle the Haas campus.

“So, you just in it for the money nowadays? Hitting corporate bank accounts?” Zoe asks.

Stirling peers out of the foliage at the car park.

“Third row, fourth from the left.”

Stirling strides towards the getaway vehicle.

“Normally, yes, it’s all larceny,” he says, slipping into the driving seat. He kicks the motor into life.

“Today we save the world.”

I tried out the criminal deck from the Honor and Profit Netrunner expansion, and its got some pretty good stuff in it.

All the runner factions are fun to play in their own way, but I think Criminal may be a near favourite just after Shaper. I like getting all the credits to pay for stuff (yay account syphon!).

With the Shapers, I like all the icebreakers and gear, being able to build up a powerful rig to punch through almost any ICE.

On the other hand, I do like all the viruses and high-risk runs that come with the Anarchs, so they really are only a very close third.

I guess the best fun is to be had by bringing in some favourite cards from other factions, so I get a bit of the flavour of all of them. If only I had more than 15 influence points.

My favourite corp faction is Jinteki. It is kind of hard to set traps for myself when I’m playing both sides, though 🙂