The splashing subsides and David Gore watches Maki Watanabe clamber out of the crocodile pool. Her hair is dripping wet. She sheaths her katana and limps off into the gloom between the pillars.

David edges closer to the sarcophagus. The aisle is dark and empty, but there is an eerie shuffling in the distance.

The whole pyramid shudders and there is a thundering crash as another block falls from the ceiling.

He can hear the Russian cursing on the other side of the chamber. The puzzle-lock on the artefact case must be proving tougher than expected. David grins and jams his crowbar under the sarcophagus lid.

The lid grates as it slides to one side. Ancient dust puffs out and he coughs and blinks.

A scorpion scuttles up to his boot and he stamps on it quickly. He turns back to the sarcophagus and reaches for the golden statuette inside.

Another crash reverberates through the tomb. The beam of sunlight illuminating the vault suddenly narrows. The frescoed passageway is plunged into shadow. Time is running out.

David fumbles for the figurine in the darkness. He can hear shouts as the other adventurers scramble for the entrance through the fallen stonework. He tucks the statuette into his backpack as the echoes of the last collapse fade away.

There is a low moan behind him. He starts to turn, but a final falling slab blocks out the last of the light.

Mummified fingers wrap around his neck. 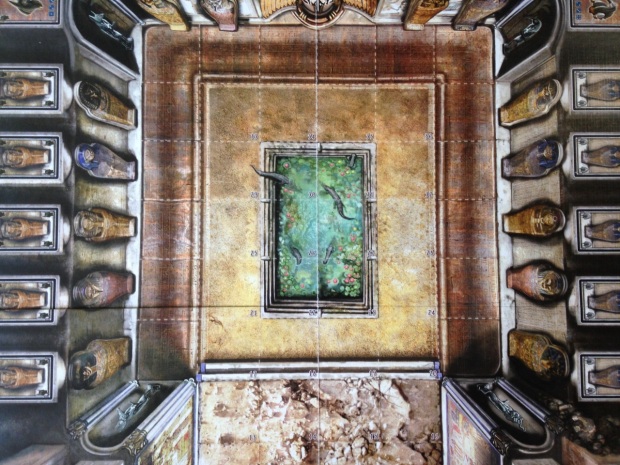 The Pyramid, with sarcophagi, sand pit and crocodile pool.

The Adventurers: The Pyramid of Horus is one of our favourite games. We bring it out as a ‘starter’ game for family or friends who might be intimidated by our more complex boardgames.

It serves as a superb introduction to some of the game concepts that will be new to people if their only previous experience is with ‘classic’ games like Monopoly or Pictionary.

The idea is that each player is an explorer and they are all running around inside the Pyramid picking up as much treasure as possible before time runs out.

All the while, they are being bitten by cobras and crocodiles, stung by scorpions, chased by mummies, and having the whole pyramid fall down around their ears.

Eventually the entrance will be blocked by falling stones and if they haven’t escaped by then they are trapped inside forever.

The winner is the adventurer who escapes with the most treasure. It doesn’t matter how much treasure you have, if you don’t manage to get out you lose!

We call these kind of games ‘heist games’. Another example is Infiltration.

We bought the additional set of prepainted figures, which are nice. Here they are:

On your turn you use each of your actions to either move a square or search for treasure. Searching means you draw a card from the appropriate deck. There are different treasures in different areas.

Some of the treasures and items. On the left: an antidote, a crowbar and a cobra bite! On the right: a two point treasure, a four point treasure and a crocodile bite!

The sarcophagi always contain only treasure, but take two actions to open the lid and put you in the path of the patrolling mummies. If you get touched by a mummy too many times, you get turned into one and join them patrolling the pyramid!

At the end of every round, you randomly pick one of the 36 plastic blocks. Inside each block is a number, which indicates which square the falling block lands on. Gradually the blocks fill up the pyramid making it awkward to move around, and eventually they make it impossible to get back out of the entrance.

The numbers inside the blocks say where they fall. You don’t want them falling on the low numbers near the entrance!

Each adventurer has a special ability that they can use once per game, but we tend to ignore those for people’s first time. There is plenty to do without these.

The whole game plays really fast and young children enjoy trying to dodge the mummies and drawing cards to see what treasure they find.

The game also has a strong moral lesson, sort of an addendum to Gordon Gecko:

“Greed is good, but don’t get too greedy or you will be trapped in eternal darkness and doomed to wander the halls as one of the undead for all time.”