“Sanatorium?” says Amiri the Barbarian, gesturing with her tankard, “Huh, you city-folk put way too much store by sanity. A bit of madness is good for you!”

Seelah the Paladin straightens her back. “Clarity of mind and purpose is how things get done!” she insists, “It is how civilizations are built! If we do not…”

Lini the Druid snorts mead out of her nose.

Seelah looks at her, finger frozen in mid-air. Is that a smirk on Sajan the Monk’s stony face?

The Crusaders are back in Sandpoint, recovering after their adventures at Thistletop. Strange noises have been heard at the lonely Sanatorium on the outskirts of town and they have been asked to investigate. 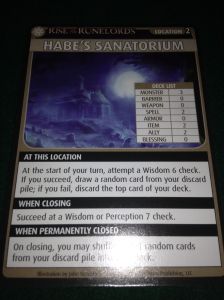 It is a grey, cloudy day as the party approaches the grounds. A shadow hangs over the dark, silent building and a damp drizzle starts to fall.

“I dislike any kind of cage,” says Lini, watching the blank windows, “I am in no hurry to go there.”

Raindrops patter on Seelah’s armour. “Dr Habe has not been seen for days,” she says, “We shall have to go in and find him, but I agree, we should secure the surrounding area first.”

Seelah goes to the General Store, and Lini to the Desecrated Vault. Amiri shelters under the eaves of the Village House and Sajan heads to the Mill.

The bell tinkles as Seelah opens the door to the General Store and she senses that the noise has alerted something behind the counter. She edges around the shelves and finds a Werewolf crouching among a pile of half-gnawed steaks. The Werewolf pounces but Seelah slams her shield into its face and it scrambles away into the darkness of the storerooms. She is beginning to search the barrels and crates when her Standard Bearer lifts the cellar hatch and the Werewolf leaps out. The Standard Bearer is knocked down, but Seelah braces herself and the monster again crashes into her shield. Frustrated, it runs off once more. Seelah grips her mace and continues to explore.

Amiri peeks through the rainy windows of the Village House. There is furtive movement inside. She smashes the window with her Mattock and leaps into the hallway. She surprises Pidget Tergelson the Wererat who is putting ornaments into a sack. He snarls and throws the sack at Amiri’s legs but she leaps and smashes her warhammer into his head. The ornaments roll around the floor. He hadn’t touched the silverware.

Sajan can hear moaning coming from the Mill. Someone is saying “Rains, rains…” Sajan blinks raindrops out of his eyes and kicks open the door. A Zombie Horde pours forth, shambling into the town and attacking each of the heroes. Despite the number of the creatures they deal with them easily. Sajan straightens his robe and strides into the Mill. It wasn’t “rains” he had heard, but “brains”! 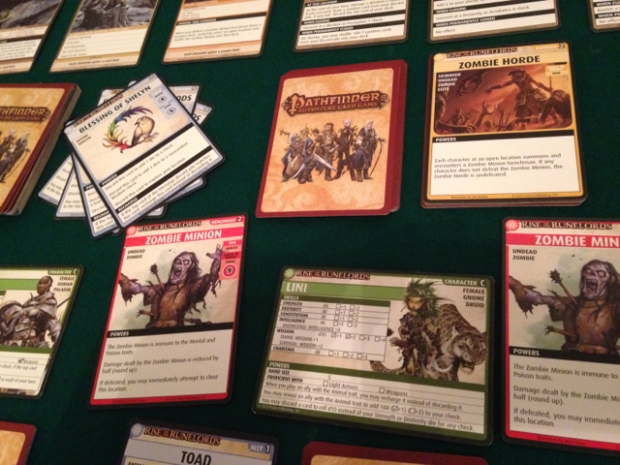 In the Desecrated Vault, Lini uses her Augury spell to avoid a Carrion Swarm, then catches a Goblin Cutpurse in the act of picking her pocket. Smilo the Tiger chases him off, and Lini picks up the Blessing he dropped.

Amiri joins Lini in the Vault. She knocks a Tickwood Boar down the hall with her Warhammer and picks up a potion.

Seelah searches the General Store. There is no sign of the Werewolf, but she finds a Skeleton hiding in a closet. She bashes its skull with the closet door and it collapses in a pile of bones. She hears moaning coming from above. Her Troubadour skips up the stairs and gets ready by the bedroom door. He yanks the door open and Seelah rushes in. A Zombie Minion is caught off-guard while trying to put on a pair of trousers. Seelah chops through its legs, solving that problem, then kicks it out of the window. She can see it crawling towards the Mill, but decides Lini needs more help.

With the Mill currently empty of Zombies, Sajan explores and finds a cache of equipment including a Cloak of Elvenkind, a Luckstone, some Chainmail and a Spyglass.

On her way through the Desecrated Vault to join Lini and Amiri, Seelah meets the escaped lunatic inmate Grayst Sevilla roaming the halls. Still wrapped in his straight-jacket, he charges at her shouting garbled nonsense. She sharply sidesteps and he runs into the wall and knocks himself out. The Vault is now clear, so all three move on.

Lini takes her pets over to the Old Light rocks and takes the opportunity to heal.

Amiri follows the crawling Zombie Minion into the Mill and runs into the missing Dr Habe being carried by another Zombie Minion. She smacks the Zombie with her Warhammer and it drops the doctor. She helps him to his feet then turns to finish the Zombie but it is limping off in the direction of the Old Light. She turns back to the doctor only to find he has run away to hide. “Crogg’s Teeth!” she curses, “I’m trying to help!”

Sajan joins her search for the doctor, when suddenly the grain silo bursts open and an Ogre swings his mighty club at them. It smashes Sajan through the wall and catches Amiri on the backswing. Her armour protects her from the blow and she manages to roll out of sight as the Ogre lumbers off in search of food.

Meanwhile, Seelah decides it is time to find out what is going on and walks up to the huge Sanatorium doors. She stands for a moment listening, but all she can hear is the rain against the shutters. She eases the main door open and slips inside.

The lobby is deserted. Water drips from the ceiling. There is moaning coming from the cells, and the sound sends a shiver down Seelah’s spine. 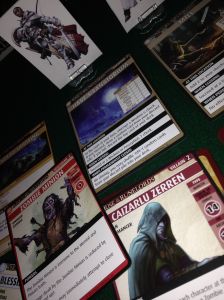 A strange light glows in the main hall. She approaches and sees Caizarlu Zerren the Necromancer performing the ritual to raise a Zombie Minion from the dead. He spots Seelah and orders the Minion to attack. It splashes towards her but she swoops in and trips it with her sword. It tumbles to the ground and she sprints after Zerren who is trying to escape. He is making for the rear exit, so she flings her longsword at him and pins his cloak to the wall. He attempts to wriggle out of the cloth, but she is too fast for him. By the time the others join her, she has him tied and subdued.

Lini sends her Tiger off to find the doctor. Sajan limps around the cells checking on the inmates.

The necromancer struggles, but Seelah kneels on his head. “He was trying to raise an army of undead,” she says, “We need to find out who is behind him.”

Amiri stands over the Villain, bruised and dripping. “I’m sure the good doctor will be happy to question him.” she says.