The Crusaders drag their booty back to town where the citizens of Sandpoint greet them with cheers. The very next day the town holds its first Swallowtail Festival in thirteen years as a celebration.

As guests of honour, the Crusaders wander the festival, sampling the food and drink and feeling pretty good about themselves. Even Amiri agrees it is worth staying a while longer.

Lini notices a small dark figure out of the corner of her eye. It darts around the back of the market stalls. Suspicious, she is looking around to tell Seelah, when shouting starts from other side of town. She whistles for her pets as Amiri dashes past heading for the noise, her longsword glinting in the sun and a fierce grin on her face.

“Goblins! Help! Goblins are attacking us!” go up the cries around town. Seelah leaps up onto the monument in the town square and starts directing people to hide in their homes. She gazes off into the distance.

“They are coming from the rocks.” she shouts, “Lini, go to Old Light and stop them. Sajan, there are goblins in the Cathedral, see if you can get Father Zantus’ help again. Amiri…”. She turns, but Amiri is already hitting things by the City Gates.

Seelah sighs, drops down from the monument and runs across to the Rusty Dragon tavern, where a stool crashes through a window with a dazed Goblin wrapped around it.

The fighting is tough at the City Gates. Amiri steps backward onto some Explosive Runes and while she is stunned a Burglar steals her longsword. Cursing, she draws her warhammer and winces as the magic burns sting. 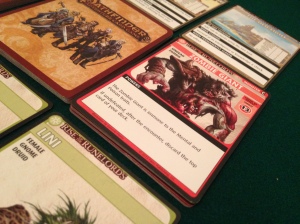 Lini and her tiger approach the Old Light rocks cautiously, but to no avail. A Zombie Giant’s club sends the gnome druid flying through the air.

In the Cathedral, Sajan kicks a Xulgath in the apse, then spies the Goblin Henchman skulking around the pulpit. He somersaults over the pews and punches the monster in the throat. He is burned by the Goblin’s torch, but the Cathedral is now secure.

Seeing that Amiri is badly hurt, Seelah dashes to the City Gates and heals her, before rushing back to the Rusty Dragon to keep the mayhem there under control.

Amiri has almost cleared out all the enemies around the edge of town when the Goblin Chief Ripnugget charges in riding his giant gecko Stickfoot. Amiri is too fatigued to put up a good fight and cannot defeat the Villain. She leaves him prancing about at the Gates, and heads back to the centre of the Swallowtail Festival.

Lini hides from the Zombie Giant and casts a cure spell on herself. Sneaking back to the rocks, she finds an Ogre who gives her a second clout around the head. Giving up, she makes a hasty retreat to the Town Square, where a Mercenary’s attempt to backstab her is only stopped by her Guard. Lini is not having a good time of it.

Seelah is busy at the tavern fighting off a Hellhound, but before Amiri can help her she has to make her way through the chaos of the Swallowtail Festival. She kills a Werewolf with one blow of her warhammer, then sends the Sage and Night Watch out to search amongst the stalls. They root out the Goblin Henchman, who is quickly pummelled into submission by the barbarian. The Festival is safe.

Sajan comes to help Lini in the Town Square and confronts the Villain’s lieutenant, the evil monk Tsuto Kaijitsu. They stare at each other in moody silence for a while and then begin to trade feints and dodges until Sajan connects with a mighty blow and KO’s the traitor.

Time is running out for the heroes as the Goblins press their attack. Lini and her pets run to the City Gates to try to drive off Ripnugget while the others attempt to control the other parts of town. 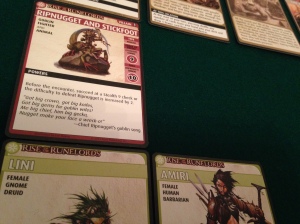 Seelah uses her charisma to inspire the remaining patrons of the Rusty Dragon into barring the door.

Sajan sprints out to the Old Light rocks and invokes several blessings to reveal the complicated mechanism that closes the underground tunnel.

With no avenues of retreat for the Villain, Lini sends her snake in to attack. Ripnugget is knocked from his seat, but the gecko Stickfoot leaps at her. Even with a blessing, she cannot avoid the creature’s charge and is knocked to the ground.

At this moment, the goblin reinforcements arrive. It is too late. Ripnugget scrambles back into his saddle and marches triumphantly into town, cackling with glee.

The Crusaders are rounded up, disarmed and marched out of town at spear-point. Atop a nearby hill, Ripnugget throws down their weapons and says, “We don’t want no trouble. We beat you once, we beat you again. You go. Never come back!”. He sniggers as he rides back down the hill.

“Nobody throws me my own sword and says run,” says Amiri, “Nobody.”