Naomi blows a perfect smoke ring. It floats across the room and dissolves under the harsh glare of the spotlight.

Tommy Malloy straightens up and flexes his fists. He wipes a speck of blood from his cheek.

The man in the chair blinks and runs his tongue around his teeth before saying, “Your father won’t stand for this.”

Naomi taps the ash from her cigarette.

“My father is no concern of yours,” she says, “and barely a concern of mine.”

The Syndicate’s Inner Council is out of touch. It has been years since they had any real influence and they have not realised that the world has moved on around them. Their ‘contacts’ at City Hall are now only low-level mouthpieces with no leverage inside the bureaucracy and whose only role is to pay lip service to the the Council’s demands and keep them in line. The wheels of the city roll on, ignorant of the Council’s opinions, wishes, or plans.

This was no more apparent than at the last quarterly conclave, where the Europeans are gradually gaining ground. There are new faces at every meeting and these newcomers do not even recognise the old guard’s names, and these are names which at one time would cast dread into the heart of the listener. Even being designated as a ‘Made Man’ holds no significance outside of their small clique. It is an arcane honour that no one in the real world cares about.

Naomi understands that any past power has already evaporated, that the city is interested only in its new endeavours and that to succeed you must follow the city, follow its decisions, and follow its money.

She leans down into the man’s face and breathes smoke from the side of her mouth. She does not want to distract him from what she is about to say.

She steps back and walks to the table which is laden down with its haul of musty tomes and cracked parchments. She unrolls one of the scrolls. It is a map of the city, similar to the one that hangs on the wall of her office, except where her own is marked with mob territories and dollar amounts, this map is covered in ley lines and arcane symbols.

“This ‘sorcerer’ that my father puts so much store by,” she says, “I need to know what he is planning, what he claims he can do for my father, and what if anything he can accomplish without his precious books and scrolls.”

Harry stays silent, but his eyes follow Naomi as she flicks through the stiff, aged leaves of a book whose title is an incomprehensible jumble of consonants.

“I shall keep these,” she says, “I may use them, or I may just prevent anyone else using them.” She snaps the book shut and a small cloud of dust puffs across the table, “Or I may burn them.” Harry’s eyes widen slightly.

Naomi reaches into her purse and brings out a small ivory-inlaid object the size of a lipstick. She walks back towards Harry and a press of a hidden catch springs out a thin, razor-sharp blade. She touches the tip of the blade to the skin under Harry’s jaw.

“Tell me,” she asks, “How strong is your loyalty to my father and his Magician?”

She presses lightly and a small bead of blood gathers at Harry’s throat. He gulps, but says nothing.

She tilts her head to one side and smiles a tiger’s smile.

“Perhaps I should mention that I, too, am skilled at making people disappear.”

One of the recent deluxe expansions for the Call of Cthulhu Card Game is the Syndicate box, ‘Denizens of the Underworld”.

The Syndicate are the gangsters and criminals of the 1920’s and 30’s. They are one of the four human factions, alongside the professors and students of Miskatonic University, the police and detectives of the Agency, and the conspirators and wizards of the Silver Twilight Lodge.

Here I am having my first attempt at a mono-syndicate deck using only cards from this set, just as I did with the other factions.

There are several themes in this set. The most obvious is Tactics. These are a particular type of event card, and in this set we have characters and support cards to work with these tactics events.

The best example is Naomi O’Bannion, the up-and-coming daughter of the current mob boss. She has a good set of icons and skill for her cost and can reuse tactics from the discard pile.

One of the key strategies in the set is Tactics. Naomi can reuse them, and can even steal her opponent’s cards, and the City Map cycles through your deck for more.

In this set, the tactics cards have some resource manipulation and removal effects. These are great because they can be reused by Naomi.

Examples of tactics. Immurement can get rid of an opponent’s key character, and Reallocate can give you an additional domain.

Another theme in this set is skill reduction. You need skill to succeed at stories and put success tokens on them. The syndicate has lots of cards that reduce the skill of your opponent’s characters, making it hard for them to win stories.

A nice twist on this is to have cards that can use this skill reduction to also get rid of your opponent’s characters. Henry Knoll and Concrete and Chains are two cards that destroy a character if its skill is reduced to zero.

Skill reduction, with some removal.

There are plenty of themes to go around. Yet another is playing cards from the bottom of your deck (just like a proper card shark).

After Naomi has replayed a tactic, it goes on the bottom of your deck. You can then use House Advantage to get that card back if you want to. 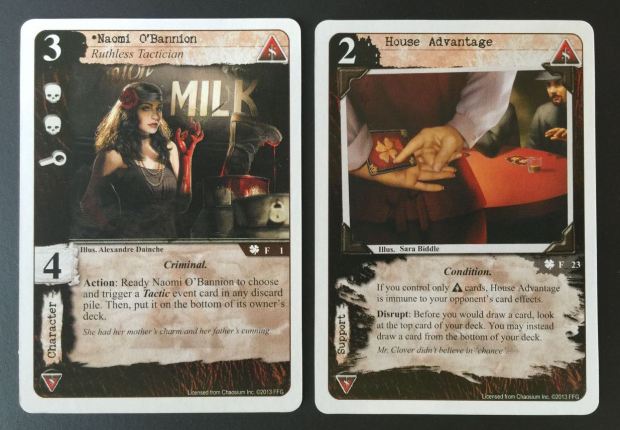 Dealing cards from the bottom of the deck.

As you might imagine in this faction, most of the characters are criminals and there are cards which support and take advantage of this. The Clover Club Pit Boss gives all your criminals willpower, and the Inner Council is a big finisher that gets more powerful the more criminals you have.

Criminals are the main subtype in the Syndicate faction.

Here is the decklist: