Day job over, Kate exits her office building and walks toward the subway. She angles her head and checks the reflection in a shop window. A dark-windowed SUV is cruising down the street. It is the same one as this morning.

She keeps walking, flips open her wrist-terminal and starts a timer. It counts up in thousandths of a second as she quickly enters a series of commands. There is a pause and then behind her she hears the airbags in the SUV suddenly deploy.

Back in her loft, Kate checks her sentry logs. NBN could be after her for stealing bandwidth, but she needs to know if they are aware of her other ‘activities’.

The logs show no sign of attempted intrusion and the meat-surveillance only started today. They probably don’t have anything significant on her yet. The smart thing to do is to lay low and let the heat die down.

Kate cracks open a can of Diesel and taps the Duke Freedom bobble-head on her workbench. It nods in silent agreement.

‘Lay low’ isn’t in her vocabulary.

Kate leans back in her chair, stretches and switches over to the NBN Nightly News. Maurice Reynault’s smug face fills the screen as he delivers the ‘News That Matters’.

“…supporting relief efforts along the Pacific rim.” says Maurice, “Finally, good news for those of us hoping for a little sun. NBN Weather predicts a bright weekend with only a 78 percent chance of smog.”

Maurice shuffles his papers and begins his sign-off.

“That was the News That Matters. I’m Maurice Reynault,…”

Shapers are not idealists, nor are they in it for the money. They are the ultimate geeks, carrying out extreme runs just to see if they can succeed, tweaking their consoles and software only for the bragging rights. They are a mix of whimsy and pride.

NBN are the largest, and effectively only, broadcast network in the world. They own almost all the media consumed by the population, together with the infrastructure over which that content is delivered. Their psychographic profiling is so powerful that they can employ sophisticated neurosciencific techniques to ensure their advertising messages reach maximum impact. They use their network of reporters and investigators to track down anyone they want to report on, or anyone who is a thorn in their side. 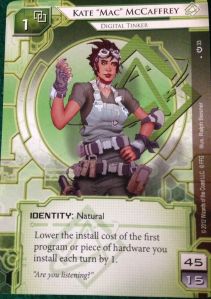 The Shaper faction specialises in programs and hardware. Kate can install both of these cheaply and has a variety of useful tools. Her icebreakers are strong and when fully equipped she can cut through any ice in her way.

NBN just relentlessly peppers the runner with tags. They make it almost impossible to avoid getting tagged, and they have several cards that take advantage of the number of tags the runner has.

In game 1, NBN was short of funds and so couldn’t get their ICE rezzed. Kate managed to win purely on runs against R&D.

She took several tags, including two from a Ghost Branch trap, but NBN never managed to make good use of them, even for trashing runner resources. Game score: 10-4.

In game 2, NBN once again couldn’t afford to rez enough ICE and so attempted to delay Kate by wiping out her savings with a Closed Accounts. In retaliation, Kate immediately sprung two surprise runs against R&D financed by Magnum Opus and stole two agendas.

NBN never managed to get an ICE with an ‘End The Run’ subroutine, so Kate kept running against R&D and piling up the tags.

NBN used a Psychographics powered by those tags to push through an agenda quickly, but Kate won again based purely on agendas stolen from R&D. Game score: 10-4.

Game 3 began unusually with NBN drawing several agendas in the first few turns, making their HQ vulnerable. They therefore installed their first ICE on HQ to protect it, which resulted in Kate quickly stealing an agenda from R&D.

The NBN faction has some cheap agendas, such as Breaking News which can be advanced in one turn, and Astroscript Pilot Program which will speed up the advancement of other agendas. In this game, NBN used two previously-scored Astroscripts to push a Private Security Force through in only one turn, giving Kate no chance to steal it.

Now that the corp had a Private Security Force which could do three meat damage, Kate had to be careful to keep enough cards in hand to avoid flatlining. This slowed down her development, giving NBN time to draw a Breaking News agenda and advance it in one turn to win the final game. Game score: 4-10.