“Crogg’s Teeth!” mutters Amiri, wiping slime from her sword. Some has splashed on her boots. “What was that thing?”

Lini’s tiger sniffs at the puddle which is evaporating in the sun. It goes to lick the slime, but Lini grabs its neck and pulls it away.

“It was not of this world,” says Lini, “I could not feel it in the Green.”

Seelah approaches the edge of the pit and looks down the crudely carved steps.

“It was from Outside,” she says, “Something down there summoned it. I wonder if the goblins knew what they were doing when they opened this up.”

“They will know what I am doing when I split them in two for ruining my boots.” says Amiri as she strides down the steps.

There have been sightings of weird creatures all around the town. Seelah goes to Junk Beach and Lini to the Old Light.

Sajan follows Amiri. Sounds of combat are already echoing up from the tunnels.

At the beach, Seelah discovers a Goblin Warrior looting the shipwrecks. She easily defeats it and takes the Magic Leather Armour it had found. Distracted by this prize, she is Ambushed by a Bugbear which had been hiding under a rotting hull waiting for prey. She sidesteps its lunge and skewers it neatly.

Lini casts a Detect Magic at the Old Light rocks and senses goblin-kind. An Augury spell indicates the Goblin Pyro’s exact location, so she hops around the other side of the rocks and runs straight into a Goblin Warrior. Caught by surprise, she flings her snake in its face but the Goblin lands a swipe as she dodges away. “I need more Augury spells.” she winces. 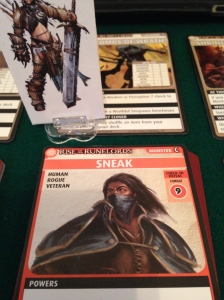 Sajan reaches the bottom of the Catacomb steps to find Amiri standing over the bodies of a Cultist, an Ogre and a Mercenary. She is cursing into the dark.

“Someone stole my spear!” she growls, then runs off into the gloom. Sajan shrugs and follows a passage to the Shrine to Lamashtu.

A shadow falls over the beach as a Wrathful Sinspawn coalesces out of a foul-smelling vapour. It hisses at Seelah and lashes out with a demonic claw. She calls on her holy might and slices clean through its body in one sweep. The two halves melt into a pool of slime which soaks into the sand.

In the Shrine, evil forces press down on Sajan’s mind, his blessings causing him pain. He grits his teeth and fights off a Zombie and a Werewolf before the ache becomes too much. 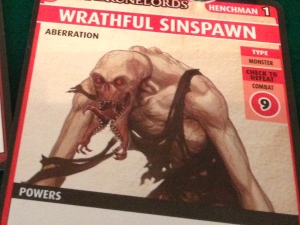 Seelah arrives at the Shrine to find Sajan collapsed by the altar. She is curing his wounds when a Sinspawn materialises behind her.

She sees Sajan’s eyes widen and whirls as it pounces, spiking it in the maw with her longsword. She steps up to the altar and calls on the Maker to cleanse the Shrine of evil.

Amiri is chasing the Sneak through the Catacombs of Wrath when she slams into a Sinspawn as it condenses into this reality. She gleefully separates its head from its body. A second Sinspawn begins to appear, but she thrusts her flaming mace at it and the portal closes.

Sajan and Seelah leave the Shrine. Foul smoke is rising from the Glassworks so Sajan investigates. Seelah notices a nearby Village House is suspiciously quiet.

At the Glassworks, a Sinspawn appears as Sajan enters the foundry. He spins and kicks it into the forge where it bursts into flames and vaporizes. With the help of his Sage he invokes the runes to seal the portal it came through. 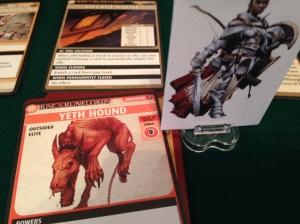 Amiri joins Seelah to investigate the strangely silent House. In the kitchen, a Yeth Hound is devouring the contents of the pantry. It finds Seelah much more appetizing and gnaws through her shield and magic leather armour before she can fend it off.

At the Old Light rocks, Lini just cannot get away from the goblins. She only narrowly escapes, badly bruised, from both the Goblin Warrior and the Goblin Pyro. Her pets are lost and she is out of spells. She feels very sorry for herself.

Amiri checks the cellar of the Village House and finds a pentagram and a smell of sulphur. Out of the shadows steps Erylium, an Outsider Sorceress. She cackles as she invokes a portal and a Sinspawn steps through. 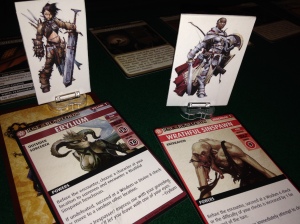 Seelah tackles the Sinspawn, shoving it back against the cellar wall before crushing it with her warhammer.

Unperturbed, Erylium advances towards Amiri, sneering at her. Amiri does not have the arcane knowledge to banish the Outsider back to her plane, so instead she hacks at her with her sword until she stops moving.

The adventurers regroup in the clean air of the town square. The outsider menace is gone, but the town does not feel the same.

“I do not like this,” says Lini, “We are not dealing with simple bandits and goblins any longer.”

“It all gives me the creeps,” says Amiri, brushing her forearms.

Sajan is trying to wipe slime from his robe. He grimaces.

Seelah is thinking. “The goblins must have known the Catacombs were here.” she says, “Someone sent them.”

“We should go and find out who.”