I managed to get a core set of Star Wars Armada at a discount. I wasn’t going to get this game because it seemed to me to be a whole level more expensive than X-Wing miniatures, both in terms of the base set and also the add-on ships. They are all bigger so it isn’t bad value, but I couldn’t see me spending too much on it. I got it at 40% off so I am pretty happy about that. 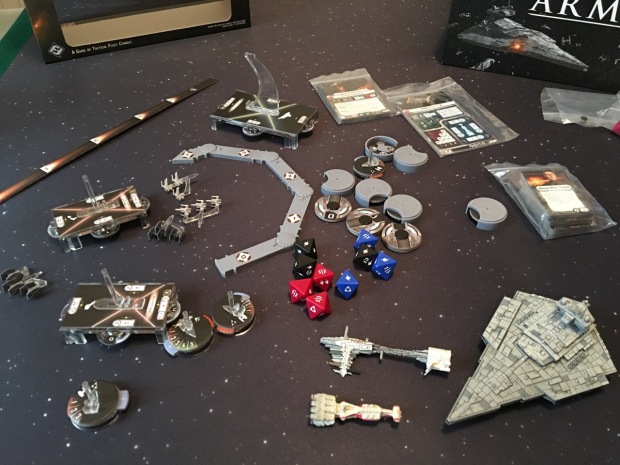 This isn’t all the bits. There are loads of tokens and cards and stuff. (The star field play mat does not come with the game, that is the mat I got for X-Wing).

You get three ships in the core set, along with all the bits and pieces you need to play.

The ships are the big triangular Imperial Destroyer (like the one that flies over your head at the start of the first film), and two smaller rebel ships.

These ships are gorgeously detailed, and are pretty much good enough to be stuck on a shelf as ornaments.

For game pieces they are absolutely huge. This is the Destroyer: 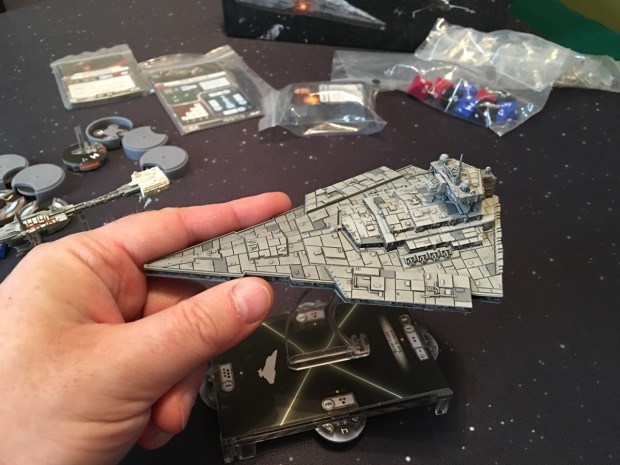 Every picture is better with some Tim in it.

In this next picture you can see more of the details in the bridge of the destroyer, and the gun batteries down the sides: 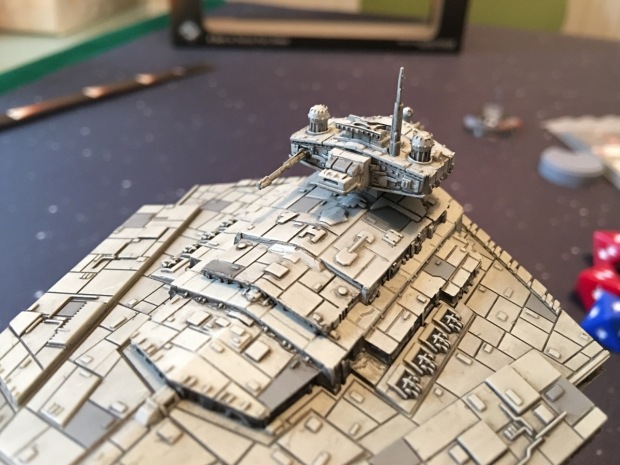 The ships fit into stands which contain all the numbers for how powerful and tough each ship is. There are clever little dials on the sides of the bases for keeping track of the ship’s shields. 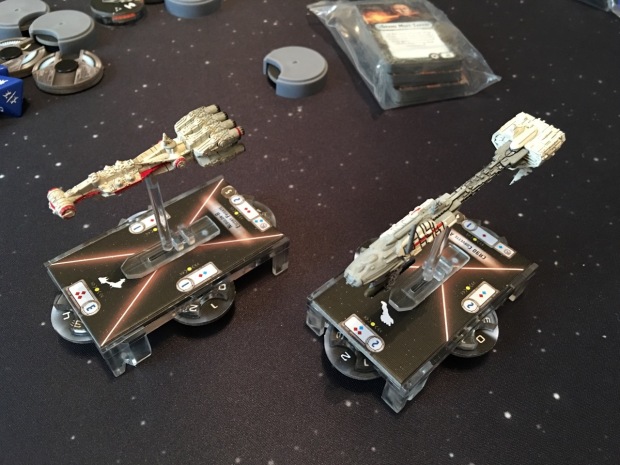 The two rebel ships on their bases. Ships can fire in all directions so they have four firing arcs.

In general this game is exactly the same as X-Wing, just on a different scale. The ships move around on a play area using a movement template, fire on other ships using dice rolls, and are customised using sets of cards with special abilities.

You also get a whole bunch of squadrons, X-Wings and TIE Fighters. These fly around the big ships and aren’t terribly powerful, but can support your attacks. 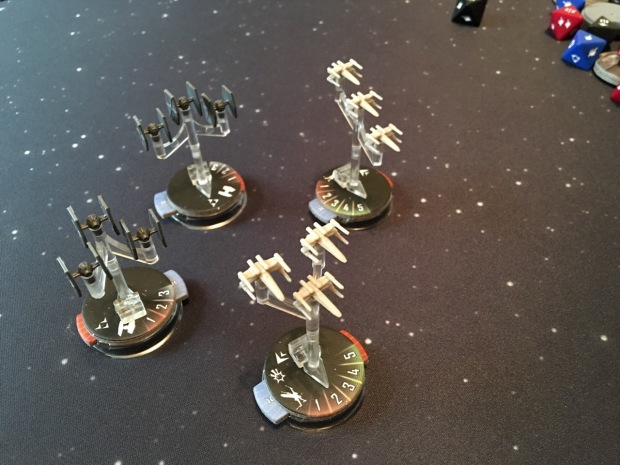 Some of the squadrons. These aren’t on the same scale as the big ships. If they were you wouldn’t be able to see them. There is even an apology in the rule book for these being bigger than their true scale. Game nerds can be very pedantic.

With all the bits of card to be clipped into bases and stands and models and dials and stuff, it took ages to put everything together. 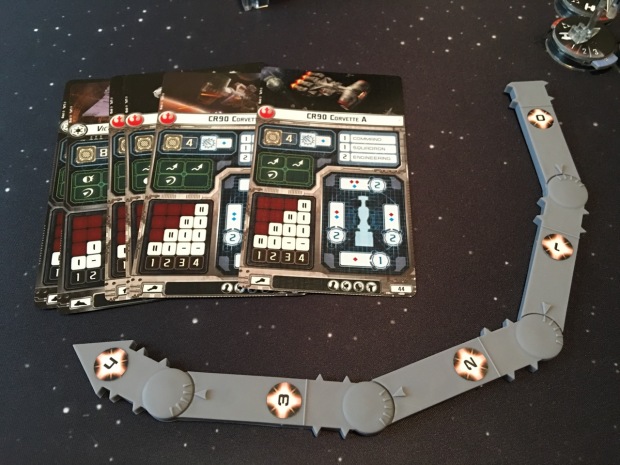 Ship cards and the movement template. There is only one template, unlike the many in X-Wing, but it is a bit more complicated.

The movement is done just like in X-Wing. You use the template to position your ship.

What is neat about the Armada template is that these huge ships are not very manoeuvrable, but they can drift to the side as well as moving forwards. The template can be bent according to how manoeuvrable the ship is and how fast it is going. 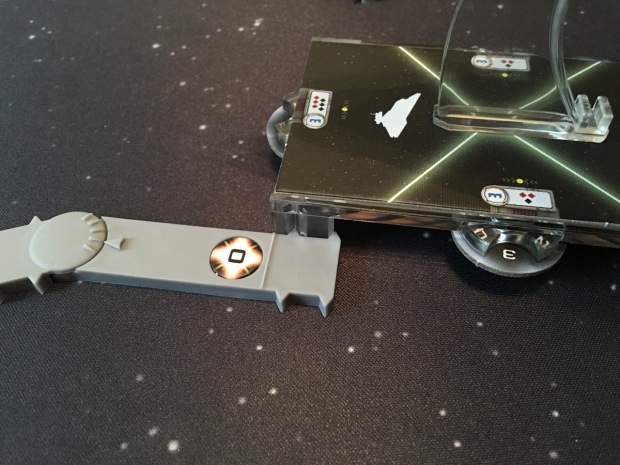 At the start of a move, the template is placed by the front of the ship base. 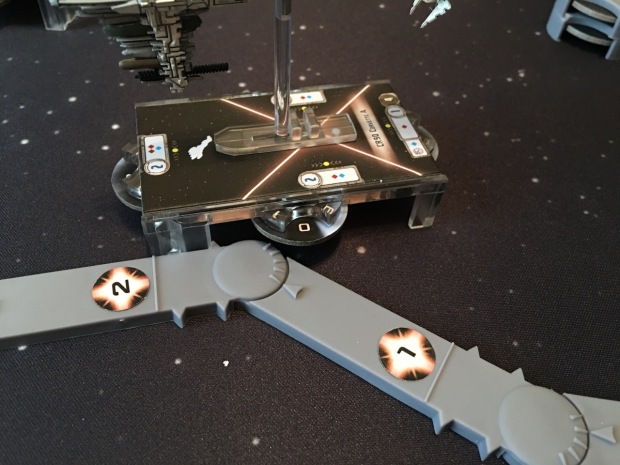 Then you move the ship to its new position along the template. It has both moved forward, shifted to the side and turned a little.

Unlike X-Wing, you don’t declare your moves in advance but you do have to declare the commands of your crew in advance.

These commands are things like repairing the ship, or directing your support squadrons. You use a stack of command dials to set your commands in advance.

The command dials. You set the dial to your chosen command, then put it on the bottom of the stack. Each turn you carry out the command on the top of the stack.

Attacks are done with a special set of coloured dice. These are different from the ones in X-Wing, but have the same sort of icons for hits and criticals and other effects.

The attack dice. There are no defence dice. You can’t dodge in a star destroyer.

Like in X-Wing the ships come with basic stats, and options for customising them. You can spend points to assign upgrade cards with special abilities. 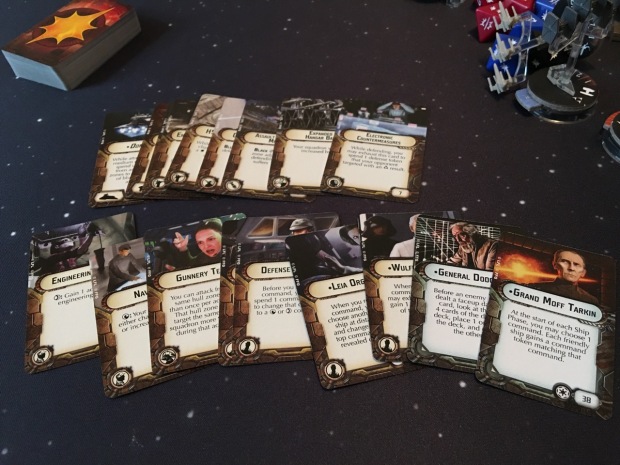 One thing about Armada that sets it apart from X-Wing in terms of gameplay is that a game only lasts six turns, and there is a specific objective to complete to score points to win. You can also usually win by destroying all the opponent’s ships, but you don’t have to.

The objectives come in a set of cards, and there are rules for determining which objective is used from those chosen by the players.

The objective cards. Most of these have rules for how to score points in the game. There are a variety of different types including ‘capture the flag’ kind of games.

You can play a game with the three ships in the core set on a 36 inch by 36 inch playing area. This is the X-Wing play area size, and I have a mat for this.

For a full game with a larger number of ships you are supposed to play on an area of 36 inches by 72 inches! I think this is bigger than our dining table, so I won’t worry about getting too many ships. It will just not be feasible. A smaller game sounds fun and quick, though. I will see what it is like.