Bifur puts down the book, being careful not to damage the crumbling pages any further.

His fingers trace the runes carved into the dusty tomb. “Balin, son of Fundin. Lord of Moria,” he reads.

Gimli is by the door to the chamber.

“The orc patrols were below us but I can no longer hear them,” he says, “It does not seem likely that we have lost them.”

Dain joins him at the doorway. A flicker of fire gleams far down in the atrium. It grows brighter as they watch.

“There is nothing more for us here,” says Dain. He turns to Bifur who still stands by Balin’s tomb.

“Come, Bifur,” Dain says gently, “We must leave this place.”

“We had many adventures together over the years, Balin and I,” he says.

“Indeed. He fought valiantly alongside me at the Battle of the Five Armies,” he says, “but I sense a great peril approaches and we must away.” 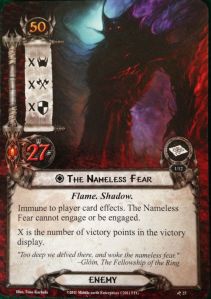 The company hurries out of the chamber and heads west towards Hollin Gate and ahead of the glowing fire. The temperature has risen and the air is warm, unlike the usual chill of the mines.

They are busy checking behind them when at the head of the party Gimli is surprised by a stray goblin. It leaps out, flailing its sword wildly and strikes a lucky blow on Gimli’s helmet. Gimli curses and draws two dwarrowdelf axes. Wielding one in each hand he chops the goblin into pieces.

The passage around them echoes to the goblin’s dying wail and as the sound fades the company pauses and listens. There is a moment of silence and then a boom resounds behind them. The eerie firelight grows in intensity and the booms continue louder and louder. Boom, Doom, Boom!

“Run!” shouts Dain, “I fear this is an enemy we cannot hope to defeat!’

“Durin’s Bane!” gasps Bifur, “It was thought to be buried forever. Something must have awoken it.”

Gimli grips the hafts of his twin axes.

“Even Dwarven steel is no match for devilry,” he mutters, “but perhaps we will meet some orc necks along the way!’

The maze of passages and chambers seems endless. Stairs lead up and down and the tunnels twist and turn, but Dwarves are hardy and the company presses on regardless, ever aware of the nameless fear pursuing them.

At one side of a large pillared hall, Bifur stops.

“There is a weakness in the wall here,” he says, “If we had tools we could break through and escape.”

“We did not bring tools for mining, only weapons for fighting,” says Gimli.

“Perhaps we should search for any abandoned tools nearby,” suggests Bifur.

“We should press on,” says Dain, “Westwards is our only escape.”

Even this hasty council has delayed the company for too long. A bright fiery light floods the hall and there is a crash from the entrance. A blazing whip curls between the columns and scatters the party.

The whip cracks across Dain’s breastplate and he is flung against the wall. As the whip retracts, the columns collapse and the ceiling falls around them.

“The way behind and ahead is blocked!” shouts Bifur, “We must take this side path. Hurry!’

Gimli helps Dain stand and the company staggers into the side passage.

The air is fresher here and a faint breeze can be felt against their faces.

“We must be nearing the surface.” says Bifur.

“Then we must beware,” says Dain as he limps alongside Gimli, “Goblins and other creatures may seek shelter in the outer parts of the mines.”

As he speaks, the company turns a corner to see a great cave-troll chewing on a bone by a huge pile of goblin bodies. It is busy picking choice morsels from the corpses and has not seen them.

Cautiously, they creep around the edges of the chamber, keeping to the shadows of the pillars. The troll lifts its head and sniffs.

Dain shouts, “Run!” and the company breaks for the far side of the hall. The troll clambers to its feet and its shoulders crack the columns as it blunders after them. They hurtle along the passageway and towards the cleaner air, the troll’s footsteps pounding behind them.

Ahead and to the side the fiery glow shines anew from the depths.

Dain limps and the others are out of breath.

“How much farther?” gasps Gimli, but Bifur is too exhausted to speak.

Suddenly there is a bright piercing flash of clear white light. The troll behind them screams and stumbles.

The Dwarves blink and ahead they see a cloaked figure brandishing a glowing staff.

“We can make our greetings later,” says the wizard, “For now we must run!”

Another bright flash leaps from Gandalf’s staff and the troll screams again.

Dain, Bifur and Gimli run along the tunnel, which grows brighter and brighter and then they burst into daylight at the foot of the Misty Mountains. After the dark and airless mines even the Dwarves are relieved.

Gandalf stands in the doorway.

“Come, my friends,” he says, “Let us repair to Rivendell and make our findings known to Elrond!”

This was a great adventure, ‘Flight from Moria’, the third in the Khazad-dum box. It alternates between being lost in the mines (you have to work through a mini-deck of quest stages to find the one that allows you to escape) and being chased by the Balrog.

In this scenario you never get to fight the Balrog. It is just always there as a constant threat, but if you draw the card ‘A Foe Beyond’ it has caught you and strikes at one of your party. If its threat has grown high enough, this is a deadly attack.

The mini-deck of quests works well, wasting your time as you try to find the way out. At one point I had a chance to escape by breaking through a wall, but I hadn’t yet found the abandoned tools to allow me to do this.

I think you do get to actually fight the Balrog in one of the Dwarrowdelf adventure packs, so I have that to look forward to.

At the end of this adventure I had quite a band of Dwarves, plus of course Gandalf who swooped in at the end to save the day.